Alpha and Omega is a Harry Potter story by Imogen. It is a sequel to Carpe Diem, and both fics were early and influential examples of the Harry/Ginny pairing, though they did not meet with universal acclaim. 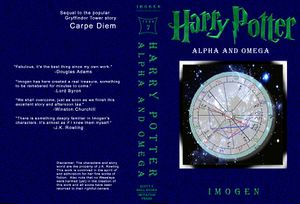 "Official book cover" for Alpha and Omega, designed by Raptor6409.[1]

Alpha and Omega is part of a series of stories in a shared universe. The official order of the series as listed on Imogen's website is as follows:[2]

There are many other stories based on the universe by a variety of authors including Firebolt909, Chryslin, and Maid Marian. There have also been many works of fanart and even a musical composition created based on the series.[1]

Alpha and Omega gained notoriety after BNF and H/Hr shipper Cassandra Claire complained vocally on her LiveJournal and FictionAlley's message boards about how much she hated it.

In my quest to attempt open-mindedness on ship issues, I decided to read an H/G fic. And I did, and I feel sick now. I won't describe it too much, but it involved Harry and Ginny getting married *while still in school*, Ginny getting pregnant, and a lot of baby-talk. And Ron somehow being okay with his sister's knocked-up-child-bride status. Oh my God. Yes, I know there is trash in every ship, but this was recommended to me as one of the best in that pairing![3]

Claire's comments caused much wank and anger in certain Harry/Ginny communities, especially Gryffindor Tower, an archive at which Imogen was a mod. One of the other mods, Chryslin, who had herself written a story in Imogen's universe, had a husband named Jeff who began sending Claire threatening emails, demanding apologies and claiming that he knew where Claire lived and could do her harm. The situation escalated to police involvement and caused a general fandom uproar that contributed to the animosity between Gryffindor Tower and FictionAlley. For a more complete account of events, see StalkerGate.