Abby/Kane, also known as Kabby, is the het pairing of Abby Griffin and Marcus Kane in The 100 fandom. They have a canonical relationship.

Their love for one another doesn’t negate their strong opinions; instead, it becomes another way for them to love and support each other.

At the beginning of the series Kane and Abby have an adversarial relationship, with Abby believing The 100 are alive on the ground and often breaking the rules to prove it, and Kane determined to follow the rules to the letter in order to ensure the survival of the human race. At the beginning of season 2 they are still adversarial, but as the season progresses they work together for the benefit of the group and begin developing a friendship. In season 3 they kiss for the first time, and are shown to be willing to sacrifice themselves for the other. By season 4 they are in a committed romantic relationship, with Abby declaring her love for Marcus before what she thought was to be her death. 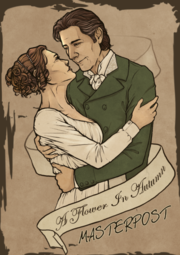 Art created for the fanfiction A Flower In Autumn