From Fanlore
(Redirected from Aang/Katara)
Jump to: navigation, search

Kataang is the het pairing of Aang/Katara from “Avatar the Last Airbender”. It is the main canon pairing of the show, and of moderate-to-high popularity, with 3,555 works on Archive of Our Own as of November 11, 2021.

Outside of the fandom, it is mostly known for being one of the two sides in the notorious Zutara vs Kataang shipwar. However, the pairing maintains a core group of passionate fans who are still creating content, despite the show finale airing in 2008.

Katara met Aang in the very first episode, freeing him from an iceberg and setting off the chain of events of the show. Despite initial uncertainty and suspicion from Sokka, Katara’s brother, the two became fast friends, getting along beautifully from the outset as Katara accepted his invitation to go penguin-sledding with her.

When he learned she was a Waterbender, Aang promised Katara he would help her get to the North Pole to find a teacher. They have a close bond and Aang finds his anchor in Katara, while Katara looks up to him as the Avatar and a powerful and wise bender. Aang develops romantic feelings for Katara very quickly and often tries to clumsily court her during Book One: Water. The first time their romantic feelings are hinted at is in The Fortuneteller (the fourteenth episode of Book One: Water).

The relationship was a series-long slow burn, a strong friendship blossoming into mutual crushes. The series concluded with a kiss between the two, and the sequel comics delved more into the relationship's growth. 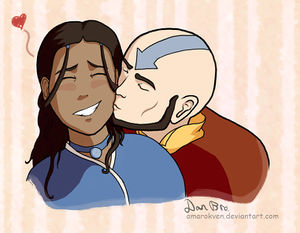 Fanart of adult Katara and Aang as depicted in flashback scenes in The Legend of Korra. Art by Amarokven.

In the second Avatar series, it is confirmed that Aang and Katara proceeded to get married and have children.

Aang and Katara's descendents (both children and grandchildren) are important side characters, with Tenzin, their youngest child and the only born airbender, being a major character from the outset of the show. It is his responsibility to train the next Avatar, Korra, in airbending.

Aang and Katara's firstborn son Bumi (presumably named after King Bumi of Omashu, Aang's oldest friend from the original series) and daughter Kya (named after Katara’s deceased mother) are introduced later in the series. Kya is a waterbender, while Bumi is born a non-bender. Bumi develops airbending abilities later on in the show during the Harmonic Convergence.

Though not explosively popular, Aang/Katara had a large and very devoted fanbase at the time of the show's airing. During this time, Kataang shippers found refuge on a number of sites that no longer exist, such as Avatarspirit.net, tv.com, dongbufeng.net, and kataangforever.com. The only site that had been popular during the show’s airing that can still be found running today is Deviantart. These sites were often places that fans would gather after episodes were leaked— key among which for Kataang shippers were “The Headband”, “Day of Black Sun”, and “Sozin’s Comet”, as these had explicitly romantic moments between the two characters in them.

According to fans, one of the appeals of the pairing was watching the characters build a friendship and grow together, overcoming obstacles, protecting each other and getting stronger as the series progressed. The fans would document and write lengthy posts on Livejournal and Tumblr discussing the defining moments of the relationship[1].

Some fan favorite episodes are "The Fortuneteller" when Katara realized she thought of Aang as more than just a "sweet goofy guy," “The Cave of Two Lovers” where a fade-to-black masks a potential kiss between the two, the season 2 finale when Katara catches Aang after he is shot with lightning by Azula, their dance in the second episode of season 3 “The Headband” (for which the fandom coined the term “Kataango”), and the kiss they shared just before the midseason battle.

Since the pairing is canon, there are many additional moments from other scenes and episodes that are popular to include in edits and gifsets, such as a waterbending practice session between the two during “Bitter Work” in season two.

Themes and Tropes in Fanworks

The ship is quite versatile to fans, whose works ranged from G-rated fluff and character and relationship building, to darker and more serious angst, hurt/comfort, and smut.

Trends within fanworks evolved over the course of the series’ air time. During the second season, much of the fanfiction about the pairing was fluff, with a special emphasis on exploring the potential kiss between the two during the Cave of Two Lovers episode. After the season two finale, Crossroads of Destiny, there was a profound shift towards more angst-driven works. Fans coined the term “kataangst” to discuss fanworks of this variety. Often the angst was hurt/comfort surrounding Aang being brought back to life by Katara, and her healing him, set in the time between the second season and the third.

While the show was airing and immediately after, most fans writing smut aged the characters up and set it in a distant future after the Firelord had been defeated. Others wrote tame sexual explorations that didn't go further than making out. When it was announced that Aang and Katara had not only stayed together and married but that a major character in Legend of Korra was one of their three children, the fans were ecstatic. Many enjoyed speculating on what the comics and the series didn't cover: Aang and Katara's wedding, the births of their children, and how they spent their time as a family (a notable example of this is Tales of Republic City, linked below). After this point, the majority of smut written by fans became centered on the future versions of the characters seen in flashbacks during the sequel series.

Other trends within Kataang fanworks include:

This pairing has come under a lot of fire from the fandom. Part of this is due to the popularity of rival ship Zuko/Katara, whose fans felt their pairing deserved to be canon. This has resulted in Kataang fans often being accused of liking and defending the pairing "just because it was canon," but many fans have refuted that by pointing out that they enjoy the chemistry between the characters and their interactions, and would continue to ship it regardless of canon status.

The ship war Kataang vs Zutara has been around ever since Zuko was first introduced, when fans of the show latched on to the character and began shipping him with Katara. The ship war reached a fever pitch at the finale of the show, where Aang and Katara are confirmed as a canon couple.

Some of the more extreme Zutara shippers denounced Kataang as fake and insisted the ending was just Aang's dream, and turned many vicious attacks on the creators. Others wrote lengthy essays trying to disprove the validity of Aang/Katara,[2] or trying to make the pairing sound as creepy and horrible as possible to discredit it.[3] As a result, Aang/Katara shippers fought back in defense of their ship, though some would take it too far in the other direction by declaring all Zutara shippers delusional idiots, even the ones who were amicable and didn't bash anyone.

Some fans felt the series didn't handle the pairing correctly, finding the kiss at the end of the series rushed due to the last major interaction between Aang and Katara being the tense and awkward scene in "The Ember Island Players". This included some fans who previously enjoyed the pairing; despite rooting for the characters to be together at the end, they wished that there was a more clear resolution of the conflict between the two. However, most shippers of the pairing felt that the narrative resolved the scene, and that Zutara shippers were just looking for a way to discredit the ship. [4] [5]

The post-series comics fanned the flames even further; people who didn't like the ship took offense to seeing Aang and Katara's sappy couple moments, while some fans felt their relationship lost some of the charm it had in the TV series.

When the sequel series The Legend of Korra was announced, confirmation that the character Tenzin was the son of Aang and Katara set the fires roaring anew. Zutara shippers began to claim that Katara’s ending was unsatisfactory, and that she should have never married Aang.[6] Some of the evidence that was used to justify this opinion was the fact that Katara, unlike the rest of the Gaang, is not shown to have a statue of her during the series. Kataang fans pushed back with several arguments— such as the fact that Katara was one of the few Gaang members still living, and that a statue is not necessary to have had a profound impact on the world.

Recently, TVTropes and parts of Tumblr have claimed that only Mike and Bryan cared about Aang/Katara, forcing it on the writers, animators, and voice actors who preferred Zuko/Katara. Almost no proof has been offered beyond Dante Basco's tumblr account confirming he had a soft spot for the pair.

As of the late New Tens, the pairing has experienced something of a new renaissance. When “Avatar The Last Airbender” released on Netflix, old fans were drawn back into the show, along with newcomers who were just seeing the show for the first time. This collective of blogs began to post a steady stream of fan content, meta, and defenses for the pairing on tumblr, and new fics being uploaded to Archive Of Our Own, Fanfiction.Net and Wattpad.

One of the trends of this new wave of shippers is that more emphasis has been placed on the show's non-Western inspirations, particularly Aang's culture and his mutual status with Katara as the survivor of a genocide perpetuated by an imperialist nation.