A Witch's Desire is a GabeNath fanfiction written for the GabeNath Reverse Bang by Creativitydeficient. It is rated T for Teen (rating). The fic was beta-read by chasethatgreen.

The premise for the fic is based on artwork created by mrwaddlez. [1] 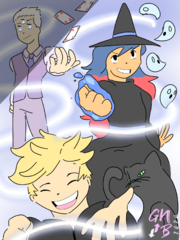 This art piece by mrwaddlez served as the inspiration for A Witch's Desire.

Gabriel Agreste was a peculiar man, who was known around town both as a famous fashion designer and a powerful witch who was able to read and control minds, though he never used that second power unless there was a real emergency. Heck, he barely even used the first. But after losing his wife, Gabriel becomes desperate to do anything he can to bring her back, even that means using his powers for evil, or tracking down a mysterious powerful witch who had disappeared many years ago, with the power to bring the dead back to life.

WHOA I was not expecting that ending! Gabriel wanted her terminated, but not like this!amsves, Dec 19, 2020 [2]

I'm super fascinated by how Nathalie's powers function essentially the same way the wish does. It's so tragic, like she was fated for this doom. It's cool because I see things similarly when it comes to the actual show, but here the connection is so much more direct. I love it. The narration was very engaging too!ReminiscentLullaby, Dec 19, 2020 [3]

I liked everything, but especially that all the powers in the story are somewhat similar to the show and even when they aren't (in Nathalie's case, the results are similar to what we expect would happen. That being said, it broke my heart.carola_tavs, Dec 20, 2020 [4]

You did a wonderful job with this AU! Your backstory for Gabriel, weary of people always asking and asking, and also for Nathalie always on the run, was fantastic. They both had bad experiences and similar fears, which makes the end even more tragic: together they could have had a chance to be healed, but nope, he didn’t even look back, ever.Ketenn, Dec 22, 2020 [5]