Writers University was an online resource website that offered centralized discussions of fan fiction. It was the precursor to Fan History Wiki. Much of the information was copied from discussions on the FCA-L mailing list but the essays were mostly written by Laura Hale who was involved from June 2000 to May 2005.[1]

In addition to IRC chat, there was a forum/message board and mailing lists along with featured articles and essays about media fandom.

Some of the mailing lists listed on the websites front page in 2001: wuannounce (general announcements), wugeography (find out about conventions), Over 20 Club (For the mature discussion of all things fan fiction.), Slashers-Unite (Slash discussion list about handling flames) and sfsters (Science fiction discussion list for teens and college students). 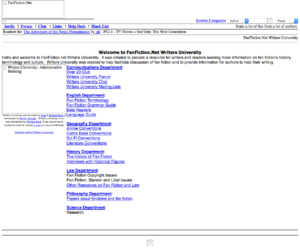 Writers University at FanFiction.Net as archived by the Wayback Machine on October 22, 2000.

Announcement on the FanFiction.Net home page in late 1999:

Now introducing Writers University! WritersU, the resource for writers and readers seeking more information on fan fiction's history, terminology and culture. WritersU, the place where you can find a beta reader, learn to beta reader, and in your spare time pick up a little Japanese.[2]

A description of the site when it was still a part of FanFiction.Net:

Writers University was founded by Xing [xing@ucla.edu] & Michela Ecks [mecks@Prodigy|prodigy.net] at the behest of Steven Savage [badger@infinet.com]. Writers University is run and maintained by Michela Ecks. If you would like to contribute material, please e-mail an inquiry to Michela.[3]

Origins of the Site

From the front page:

Have you ever wondered about the history of fan fiction? Have you run across a post about fan fiction and wondered what half the terms meant? Are you looking for a beta reader? Need ideas for stories?

Fan fiction is written by hundreds of thousands of people across the globe. Fan fiction is read by millions. With the advent of the internet and its permeation deeper into our society, it is no longer something locked into paper zines. Fan fiction is something with a history and culture all its own. Fan fiction is about writing and kinship with people. It's a method of connecting to others who share your interests through writing.

On the About Page the site goes into greater detail about its origins:

Writers University was founded in September of 2000. It was originally housed at FanFiction.Net but because of personality conflicts, went looking for a new home in early January of 2001. It was down till about February 11 when parts of the site went up at its new location http://writersu.s5.com/ with a new layout and new look. It has yet to have all its original content put back up.

Writers University came into being after repeated posting by Michela Ecks to the FanFiction.Net forums and mailing lists with such useful information as the history of fan fiction and a dictionary of fan fiction terms. This was augmented by "The Over 20 Club." Steven Savage and Xing Li asked Michela to create a site for fanfiction.net for that sort of information to help lend credibility to the site(FanFiction.Net).

Michela agreed and brought in to this project one of the nicest and most helpful people in all of fandom, Haven (real name is Niamh) who had helped Michela with such projects as Truth in Feedback and the b5teens.

One of their first goals was to create a list of beta readers who were willing to beta read for fan fiction writers at FanFiction.Net. Because Haven and Michela have pretty high standards, they required that all applicants take a test before being listed. This was a really popular and hlpful feature. (This feature is down at the current time because of time constraints and changing interest on Haven's part but will be back up soon.)

With the move to the new address and by disassocaiting [sic] Writers University with FanFiction.Net the staff was given a much needed break and the site was given a fresh new look. The stress levels of those on staff dropped. All is good :o) though they really need to update more.

The driving force behind Writers University has been and always will be Michela Ecks. She is currently a senior at Northern Illinois University. She has been involved in fandom for about six years. Her goals for the site are to get more content on the site, add more articles, essays and to recruit writers who are interested in actively submitting material to Writers University.[5]

In 2002, Hale described the site in a paper she wrote about FanDomination.Net:

The first is a dictionary of fan fiction terms. Members can join and add comments about the definitions, links to more information about the topic, dispute the definition, and comments about how this has effected their fannish experience. This is helpful for fan fiction writers and readers because it helps them become more fluent with the nature of fandom, and more familiar with the terminology used at FanDomination.Net.

In addition to the pre-existing features, Writers University will have several new features. These features will be the ability to upload articles into specialized subject areas. The topics will be divided by Communications, English, Foreign Language, Geography, History, Law, Philosophy, Science and Extracurricular Activities. The resource for authors of book based fan fiction because the Terms of Service for the site stipulates that authors must include in their disclaimers what the author policy of the material from which their fan fiction is derived from is. If an author does not include this information, their story will be deleted. Writers University is one of the only sites on the Internet to have this information.

This is one of those blatant plugs and I know those generally are frowned upon in most circles but um... away I go anyway :o)

www.FanFiction.Net is a large archive of fan fiction from a bunch of fandoms. It's really easy to submit stuff there. If you want to broaden your reading audience, then I highly encourage you to join and post.

Writers University found at http://www.fanfiction.net/university/ is a writers resource with a history of fan fiction, fan fiction terminology, beta readers, information on law as it pertains to fan fiction and more. :o) I highly encourage you to visit and use the beta reading section. I also encourage people to go there and apply for listing on the beta reading page. It's really hard to find a good beta reader and we want to make the easier... There are a lot of budding authors on FanFiction.Net who could really benefit from having a good beta readers so if nothing else, please do that :o)

Thank you for Reading.[7]

Writers University will remain a separate and distinct part of FanDomination.Net. This is being done to afford Writers University a certain legal protection should FanDomination.Net face legal action. Another reason Writers University will be a separate site affiliated with FanDomination.Net and not located on its server is so that both sites can support fannish activities with out alienating people who are ideologically opposed to either sites's policies and views. Among the planned projects that will be resources for authors is a scholarship fund for fan fiction authors going into college, and a site with information on the legality of fan fiction with contact information for fannish lawyers who can help fans deal with Cease and Desist letters.[8]

A Predecessor to Fan History Wiki

Fan History is an outgrowth of Writers University‘s history department. Writers University was founded back in 2000 on FanFiction.Net by Laura under the nome de pume Michela Ecks, moved off about six months later, spent several years at writersu.s5.com, on its own domain and otherwise in a state of flux. The site eventually folded, with some of content being moved to FanWorks.Org, a precursor to this wiki found on another site and in an unpublished fanzines. During this period, Laura‘s research into the history of fan fiction and fandom continued.[9]

Laura Hale later made links to some of the essays below at Fan History Wiki Blog, Archived version, last updated in 2008.

In 2001, the site was organized in the following areas:

Laura Hale and the Split from Fanfiction.Net

Laura Hale and Writers University left fanfiction.net in January 2001 on bad terms, with Hale posting a long farewell letter to various ff.net forums detailing her reasons for leaving, including repeated mentions of the fact that she felt she had been lied to and that some of the people she'd been involved with had proved untrustworthy.[10]

A January 8, 2001 public comment by Xing Li: "Writers University has left FanFiction.Net and I'm sad that it has left. However, FanFiction.Net will move on and so will the staffs of Writers University. You will not hear personal remarks from me or any other ff.net staff members regarding this issue as the matter was private to start with and private to end with. - Xing" [11]

Writers University was regarded by some fans as a valuable resource:

According to their own mandate, "Writer's University seeks to help people connect through fan fiction," and I'd say they do a tremendous job of it, too. This site is huge, contains dozens of resources anyone who writes or reads fanfic would benefit from reading, and (always a major personal interest for yours truly) is set out in a user-friendly format with solid links and navigation. I especially recommend their section on Mary Sues.[12]

Other fans had issues with inaccuracies on the site, however. Discussing the article on Mary Sue Whipple, Alice Karvonen Allonway (MSW's creator), said:

Telling people how she was born is extremely cool (especially 'cause, y'know, my name has to be plastered all over the story). Telling people lies and damned lies is a bad thing, especially when you know the truth of the matter. Here, I refer to the Writer's University website, wherein a false history of MSW simple beginnings is given (and her creation story is not one I'm shy about—I give it any time anyone asks about Mary Sue in my hearing).[13]