Wayward Books is a press devoted to publishing gay fiction of the original slash persuasion. 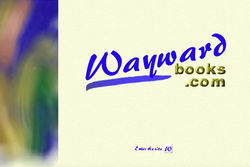 It published a new book roughly every quarter, its last new release was in 2002.

While not stated overtly on their website, the novels were fanfiction with the serial numbers filed off and other works by current and former fanfiction writers.

Its Creation and Goal

From Sara S, one of the presses' creators:

WAYWARD BOOKS is a brand new publishing house - very small at the moment! - which is selling gay fiction only on the net. The first book - The Sorcerer's Web by T.P. Macer - goes on sale on the 1st August and other books will follow at regular intervals. In our first year we shall also be bringing out Paper Flowers by Kit Fisher, Perfect Trust by S. Hardy Brondos and Kind Hearts by Evelyn Martin.

The idea was actually first discussed at ZebraCon last October, and it has taken since then to get the company launched. At the moment we are busy planning the second year of production which I hope will include The Larton Chronicles and a second novel by S. Hardy Brondos in the Swedborg & Reilly series.

WAYWARD BOOKS would really like to concentrate on publishing fandom writers. Some of the fiction produced in this and other fandoms is so good that we feel it deserves a much wider readership. If, therefore, there are any writers who would like to contact me about the possibility of publishing their work, I should be happy to talk to them about it. At the moment the guidelines are fairly loose. WAYWARD will not take any novels which have been on the net, and the length should not be more than about 80,000 words, and can be less. Obviously, names have to be changed to protect the innocent!

Having got the first book launched, we now need to publicise the company as much as possible, so please feel free to copy this message to other lists - assuming list administrators will not mind.

Some of you will have seen the flyer for WAYWARD at MountainMedia Con. If you feel you could help by taking some of these flyers and leaving them in locations where they can be picked up by people who would be interested in hearing about the company, I would be happy to ship some out to you, and your help would be very much appreciated.

The website is now on line. I feel as if I've stepped off a rather high cliff! [1]

May I please take a moment to mention Wayward Books?

This publishing house (my, that sounds grand, doesn’t it!) has now been running for a year. All the authors are fandom authors – most of them being published professionally for the first time - and so far four are British, one is American and coming up next year will be an Australian writer.

We are now delighted to announce the publication of our latest novel:

THE LARTON CHRONICLES by JAMES ANSON.

The book is available from: www.waywardbooks.com

The next publication will be the keenly awaited PERFECT HOPE by S.Hardy Brondos, which will be published in November. Saints and Darkness by Kit Fisher will hopefully follow this novel. 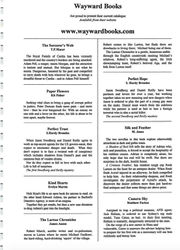 a flyer printed in the zine Even Less to Hide in 2002
From Sara S:

Wayward Books has now been in business for two years. In that time we have brought out eight novels from seven different authors, who have come from as far afield as America, Australia, Canada and Great Britain.

We have had a terrific response from fans who have bought the books, and we should like to take this opportunity of thanking everyone for their support and good wishes.... (please feel free to forward this to other lists) [3]

Thanks for the Wayward Books flyer .... are The Sorcerer's Web, Paper Flowers and Kind Hearts fanzines rewritten by their fanfic authors? [The editor's reply]: ... the novels are rewritten zines, but that the names have been changed to protect the innocent -- that is, the heroes are not Bodie and Doyle anymore! [4]

Basically, nearly all the Wayward Books are revised Pros stories from the circuit days, with the exception of Sharon Brondos' two novels (Perfect Hope & Perfect Trust - under the pen name S. Hardy Brondos) and perhaps Silk and Feather by M. Jones. Sharon has said on list before that her book characters are original, not based on Pros. And if Silk & Feathers was originally a Pros story, it's one that I've not read or seen mentioned.

When the original authors published their Pros stories, some merely filed the Pros names off but kept the stories virtually the same. Others made more changes, but as far as I remember, most are very similar.

The authors chose new names for the more visible, commercial sale of these stories. In most cases, these names were male or consciously androgenous names so as to appeal more to male readers. (It's a practice I have issues with but that's for another discussion.) That's why the Wayward version of the The Larton Chronicles lists the author as James Anson (aka Rhiannon).

I always recommend reading the originials rather than the revised "serial numbers filed off" versions because I think fan fiction loses too much when you attempt to remove the fan fiction elements. [5]

This is the Wayward Books catalogue as listed on their website.

Camera Shy by Matthew Parkes (May 2002). This book was originally written in 1986 by Meg Lewtan as The Professionals fanfic. See Camera Shy. 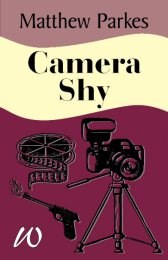 "Assigned to trap a political assassin, ASIO agent, Jack Ballam, is ordered to use Sydney's top male model, Tane Caton, as bait. At their first meeting, Ballam is instantly, dangerously attracted to the man. On the verge of a new career in films and vulnerable, Caton is unaware the adviser helping him to prepare for his first role as a mercenary will use him ruthlessly and betray him." 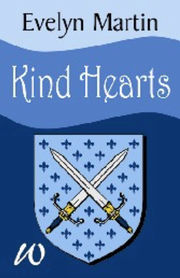 "Nick Ryan's life is an open book for anyone to read; on the other hand Edward Ashton, his partner in the successful Burford's Detective Agency, is more of an enigma. Together they get results, but then a new case threatens to drag Ashton's past into the limelight. (280 pages)" 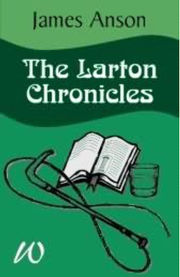 "Robert March, acerbic writer and ex-policeman, moves to Larton where he meets Michael Faulkner, the hard-riding, hard-drinking 'squire' of the village. Robert comes to like Larton, but finds there are drawbacks to living there - Michael being one of them. The Larton Chronicles is a gentle, humorous amble through the English countryside meeting Michael's relatives, Robert's long-suffering agent, the Irish showjumping team, Robert's beloved Aga, and the folk from Larton itself. Damp dogs, hard-ridden horses and snooty cats roam pages filled with the story of Rob and Mike - fighting, laughing, loving and building a life together. (299 pages)"

See a 2009 review of this book at The Larton Chronicles by James Anson - Elisa - My reviews and Ramblings, Archived version. 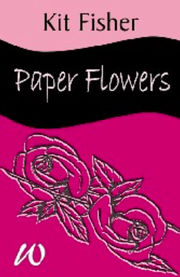 "Seeking vital clues to bring a gang of corrupt police to justice, Peter Duncan finds more pain - and more love - than he ever bargained for. With an enemy on one side and a lover on the other, his life is about to be torn apart, maybe forever. (287 pages)"

This book is not based on a fandom, but its author is the fan author, Maiden Wyoming. A fan in 2000 wrote:

For those of you who've been eagerly waiting (and have already devoured the first two) the latest offering from Wayward Books is out! It's called "Perfect Trust" and is by our own Maiden Wyoming, writing as S. Hardy Brondos.

This is *not* a re-do of her Pros novel "Journey West". These two men are new, original characters. [6] 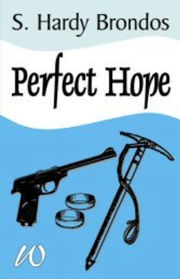 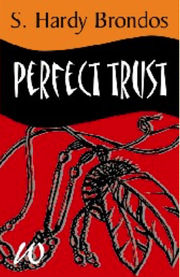 [Perfect Trust]: "When Jason Swedborg and Daniel Reilly agree to work as top-secret agents for the US government, they expect to encounter danger and death. What they don't expect is to face a twisted web of conspiracy which includes shadows from Daniel's past and the ominous beat of voodoo drums. Nor do they expect to fall in love with each other. Life is full of surprises. (270 pages)"

[Perfect Hope]: "Jason Swedborg and Daniel Reilly have been partners and lovers for over a year, but working together takes on new meaning and new dangers when Jason is ordered to play the part of a young gay man on the make. Daniel must watch from the sidelines while his partner is used as bait to lure a foreign terrorist who is also a serial killer. But he refuses to watch helplessly and enlists the aid of Jason's family in unravelling a tangled web of intrigue and violence that seems destined to leave both of them alone and without hope." (257 pages)"

Saints and Darkness by Kit Fisher (to have been published August 2002 as a sequel to Paper Flowers).

"Peter Duncan finally has a chance of happiness with his lover, Byrne - even to the point of enjoying the trivialities of domestic bliss. But no one can escape the past, and Duncan's is darker than most. When his life once more descends into violence, there is little he can do to prevent it. Once again, the lovers will need all their strength to survive the brutality that threatens to overwhelm their lives."

Silk and Feather ("A Shadow of Evil" and "A Crimson Feather") by M. Jones (July 2002). These two stories are probably original and not repurposed fanfic.[7] 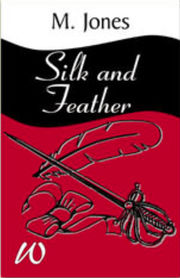 "The two novellas in this book explore otherworldly attractions in dark and gothic tones. A Shadow of Red Silk tells the story of Adrian who, sick and penniless, is forced to accept the hospitality of his ruthless cousin. Adrian is completely alone; his only hope that his end will be swift. But there are surprises in the dark, hostile house. The second novella, A Crimson Feather, has resident tough cop Rook Larson on the hunt for an antiques dealer. When Rook finds Azriel injured in an alleyway, he feels compelled to help him. As their relationship deepens, and Rook investigates the perpetrator of Azriel's attack, he discovers the dealer collects more than just hard-to-find antiques and that some things are above price. (222 pages)" 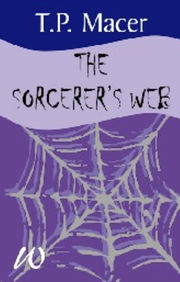 "The Royal Family of Cardia has been viciously murdered and the country's borders are being attacked. Adam Pell is a ranger, defending the realm as he mourns the death of his cousin, the king. Then he meets Morgan, on his way to enlist, and the attraction is instant and mutual. But Morgan is not what he seems. Dangerous, complex, haunted by his past and compelled by his masters to carry death with him wherever he goes, he brings a dreadful threat to Cardia - and to Adam Pell himself. (296 pages)"