From Fanlore
(Redirected from Ursula K. LeGuin)
Jump to navigation Jump to search 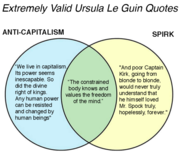 A playful Venn diagram made by tumblr blogger protectspock. The quotes reference both Le Guin's politics as well as her commentary on slash fandom's classic ship - Spirk or K/S. See the original image here.

Ursula K. Le Guin was an American novelist, primarily in the genres of fantasy and science fiction. Much of her adult writing relates to issues of gender and sexuality. Several of her SF stories mention a faster-than-light communications device, the Ansible (an anagram of "lesbian") and this name has become common in other authors' works, most notably in Ender's Game and sequels by Orson Scott Card. It's also used as the title of the British fanzine Ansible.

As were many science fiction writers, Le Guin was a contributor to zines. One example is The Witch and the Chameleon.

"The Left Hand of Darkness" 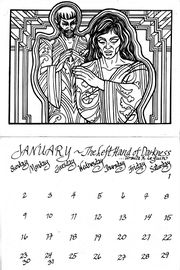 from Gayle F's Interphase calendar, "January" features a features a man (male Spock) and a woman. (female Kirk), and its title is "The Left Hand of Darkness"

The Left Hand of Darkness is an early example of feminist science fiction and genderfuck due to the Gethenian people who are genderless and can become either male or female during mating periods.

Some fans cite this book as a slashy source of inspiration. The first issue of Hanky Panky had a list of recommended reading with queer content, and this one was on it.

See Earthsea for information on the fandom and examples of fanworks and fan communities.

The Ones Who Walk Away from Omelas

"The Ones Who Walk Away from Omelas" is a short story by Le Guin. A quote from this short story will sometimes be brought up in discussions regarding media, particularly in regards to themes and endings, perceived as bleak, dark or mean-spirited, particularly in modern media:

The trouble is that we have a bad habit, encouraged by pedants and sophisticates, of considering happiness as something rather stupid. Only pain is intellectual, only evil interesting. This is the treason of the artist: a refusal to admit the banality of evil and the terrible boredom of pain.

One fan's response to this quote is astolat's Transformers Generation One fanfiction, Victory Condition, which explores the themes of this quote in Le Guin's story.[1][2]

Le Guin is well regarded by science fiction fans and media fans after her passing.