Trek Novels is a May 1977 written re-cap of an audio-tape of a panel discussion that was originally held at SeKWester*Con in April 1976. 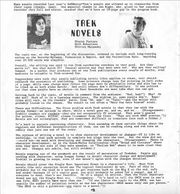 essay as it was printed in the 1977 program book. One photo is of Shirley Maiewski (light colored sweater), the other one is presumably one of the other two original panelists.

Note: this was written early enough in Star Trek fandom that the use of "Spock/McCoy relationship" is not meant necessarily as "slash."

The topic of the discussion was the quality of the fanfiction of the time, and there was much discussion on how to, and how not to, write a good, long Star Trek story.

The topic was, at the beginning of the discussion, widened to include such long-running series as the Dorothy-Myfanwy, Federation & Empire, and the Faulwellian Epic. Anything over 20,000 words was eligible.

Overall, the writing was said to run from saccharine overdose to very good. Are they worth it? Are they worth $5? General opinion was that most were not. Why are they selling? Demand. In a market that produces one or two Trek publications every couple of months, even mediocre is valuable to Trek-starved fen.

Suggestions were made that people publishing novels (this applies to zines, too) should research the economics of publishing. Some printers charge less for printing on both sides of a page, while some charge more (since the page must be physically rerun and also has to be lined up so both sides match). And still others don't differentiate. It was pointed out that some people have no choice--in East Boondocks one must take what one can get.

Getting back to the topic, of novels (a comment from the audience: "Bad, bad!") Why? Or why not? Much of it is a learning experience. The problem is, some people don't. Reactions will vary, on the readers' parts, from "Oh, wow!" to "Yurp!"--and the writer will probably listen to the oh wows. The result is too often a "Mary Sue Gets Scared" story. There are Difficulties.

The first problem with Trek novels is that they jar with the series format--an episode is short, while a novel goes on, and on, and on... (Disagreement: Treklit readers are readers--they are not necessarily TV oriented. They aren't geared for action, climax, action, climax ((comment from the floor: "They are with GRUP stories.)) Novels are not screenplays, they are sometimes difficult to translate into such a format.)

It's hard to sustain continuing characters. Even assuming we know certain things about the regulars and different interpretations of them, one can be reading along and run into an oddity that jars one out of the story.

The purpose of writing a novel is to show character development or changes--ST is like an anthology, in that each episode is complete but plugs into the rest. But the show did' not —could not—do much with developing and changing the characters. (Disagreement: There is character development, as in the Spock/McCoy relationship -- from "Bread and Circuses" where even they were not sure if they were enemies, to "Tholian Web" where it is made clear they are not. Changes are subtle, but still evident.)

Novels popping out of the woodwork are the result of maturation of Trekdom. People are working with character, using longer format to detail character change and development. Treklit is growing in scope, even if one doesn't agree with the changes detailed. Novels should cover the Single Most Important Event in a character's life. Most Trek novels (the only exception noted was The Logical Conclusion) do not. Part of this is probably due to the need in a series to get everyone back on the Big E at the end, safe and sound--because if it's really good, you will probably be asked for a sequel, and if everyone is dead, that's not feasible. Or if a sequel is written, then the first Important Event was not the Single Most etc. ((comments: "It's hard to tell the SMIE even in one's own life; most people have more than one." "If one limits the topic to the SMIE, one has

exactly the number of potential novels as one has characters--SMIE means only one per person." "The SMIE is only a guideline--one topic to a novel."))