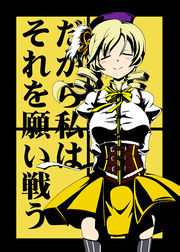 Cover of the doujinshi MamiKyou 「I wish to fight it」 by (shino (ponjiyuusu)), featuring Mami Tomoe. Background text reads "And so, that is why I'll fight for my wish."

Mami Tomoe is a character from the 2011 magical girl anime Puella Magi Madoka Magicaand its subsequent multimedia franchise. Introduced as a mentor figure to protagonist Madoka Kaname, Mami is a veteran magical girl whose abilities include conjuring yellow ribbons and pulling muskets and other firearms out of thin air. She is known for her kindly disposition and willingness to help others in need, as well as her signature move, "Tiro Finale".

Fifteen year old Mami is a third-year student at Mitakihara Middle School, one year ahead of Madoka. In their first meeting, Mami calmly and confidently rescues Madoka and her friend Sayaka Miki from a labyrinth and defeats a witch with her magic. She contracted with Kyubey two years earlier after the death of her parents in a car accident and now lives alone in her own apartment. Mami is excited by the prospect of Madoka and Sayaka becoming magical girls themselves, but encourages them to seriously consider their chosen wishes to avoid regrets.

It is later revealed that Kyubey first contacted Mami while she was on the brink of death, trapped in the wreckage of the car accident that killed her parents. Mami's wish was to save her own life; however, she regrets not asking for her parents to be restored, and is desperately lonely thanks to the solitary lifestyle required of a magical girl.

Mami takes Madoka and Sayaka under her wing while they consider whether or not to become magical girls. The two "apprentices" are traumatized by her beheading at the hands of Charlotte the Desert Witch, but remain strongly influenced by Mami's noble ideals, even as the limitations of her worldview become increasingly apparent.

Flashbacks to alternate timelines reveal Mami as a strong leader who suffered a psychological breakdown when she learned the true origins of witches, and nearly killed Homura before Madoka killed her instead. Kyoko Sakura was Mami's former apprentice before Kyoko broke away to follow her own agenda.

Mami has a strong moral code and believes it is essential for magical girls to help others, even at the cost of their own lives. Her musical theme is "Credens Justiam," or "I Believe in Justice" in Latin.

Mami's death at the end of the third episode is genuinely shocking for most viewers, who are not expecting the twist. Reaction videos on YouTube include titles such as WHY HER???, OMG WTF!, and NOOOOOO, MAMI!!!!.

As a result, most fans are very sympathetic towards the character, particularly once her tragic backstory is revealed.

I’ll be honest, I just didn’t care all that much for her during my first watching, mainly due to believing that she would turn out to be evil for the first couple of episodes (I blame Disney and their recent trend of turning almost every kindly mentor/confidante figure into the bad guy lately), and me being more surprised that I was wrong when she died instead of being shocked that she was killed. Again, had nothing against her, that was just my reaction the first time around. However, she was included in Resonance Days because it felt like the logical thing to do, and she turned out to be so much fun to write for that I really came to love and care for her character in general, and her relationship with Charlotte ended up becoming one of my favorite parts of that story.[1]

She’s gentle, caring, and virtuous, and does her best to take care of her loved ones. But she’s also not a flat “hero” character- she’s deeply insecure, gets lonely easily, and is prone to worrying. She puts herself under a lot of pressure trying to be a perfect role model since she feels like she needs to be. She’s very human and believable; I love her....[2]

Mami Tomoe’s outfit is a work of genius that really humbles me as an aspiring character designer. Watching the perfection in its simplicity only boggles my mind trying to reverse engineer the thought process behind it.... This outfit does everything. It’s sexy without being unnecessarily tasteless, it’s girly and fancy but battle-ready, it even passes the silhouette test, it’s nuanced, almost realistic. Even Mami’s hairstyle, which in a lesser design would look too childish, is perfect for her. Mami’s whole theme is that she’s a little girl desperately trying to convince herself that she’s an adult. Her low drill-tails are doll-like, which is to say a little girl’s idea of what a fancy adult woman looks like. The side-swept bangs also give a youthful roundness to her face while being elegant, and the way the hat and hairpin complements the whole thing is just * cheff’s kiss *.[3]

Mami’s mistake (if we can call it so) is to have made a wish before she could realize what she really wanted. Of course, it is comprehensible why she made such a mistake since she was dying when Kyubey offered to realize her wish and she had no time to think about it.

What is important is that Mami who Madoka sees as a grown-up version of herself is actually a person who was forced to grow up too fast and that, as a result, has not completely developed on an emotional level and this makes her very frail and lonely.

Her “premature” wish is symbolic of this and the fact that she encourages Madoka to wish for a cake means that she is encouraging the girl to repeat her own mistake.

So, in the end Mami dies killed by the embodiment of childishness since she had no chance to conquer hers because of her tragic past.

Her arc underlines the importance of growing up and the fact that an attempt to do so by forcing oneself to adopt superficial behaviours which appear as more mature without solving one’s inner-turmoil and insecurities is not an available option.[4]

The first three episodes of Madoka Magica can be understood as a struggle of sorts between the fairly standard magical girl series it originally pretends to be, and the dark meditation on hope and despair that it actually is, the kind of show that would have Magia as an ending theme. Mami is at the center of that struggle; just as the first act of a witch, before we ever see one, is to tear apart the anime art style and replace it with something creepy and strange, Mami’s first act, before we ever see her, is to create a safe space around Madoka and Sayaka where the witch cannot harm them. Her approach to fighting witches is flashy and visually appealing, and includes a signature finishing move with a called attack, all stalwarts of the genre for at least two decades.

She is also an instance of the Yamato Nadeshiko, the traditional Japanese ideal of the feminine—loyal, an excellent hostess, wise, mature, and humble, but with a core of steel. Like the traditional magical girl, she exemplifies these feminine virtues in a way that empowers her, but she’s not *too* empowered—she is continually subject to the male gaze, especially during combat sequences, with the camera focusing on her breasts, hips, and upper legs much more than for any other chaslideracter. Nonetheless, she is feminine, nurturing, and a leader and warrior, the classic combination for a magical girl.

Thus, it falls to her to fight to keep the “Magia” version of the series at bay, and it is only when she’s killed that it is able to take over. And again, her return at the end of the series to give Madoka her costume designs signals that the series is reintroducing some of the core magical girl themes it had deliberately abandoned, most notably hope.[5]

Although her screen time in the anime is limited compared to the other characters, Mami is extremely popular and frequently appears in fanworks, especially those showcasing all five members of the "Holy Quintet". As in canon, Mami is a kindly mentor figure, serving as a hostess and inviting the other characters over for tea and homemade baked goods. Other fanworks explore her crippling loneliness and insecurities that she strives to hide behind a cheerful facade. Head-related puns or other allusions to her death at Charlotte's hands are very popular.

Mami is often shipped with Charlotte, the witch who killed her, or with a (usually) aged-up version of Nagisa Momoe before she became Charlotte. Mami/Kyoko is also popular, with Mami/Homura, Mami/Madoka, and Mami/Sayaka much less common. She also appears in poly ships featuring all five members of the Holy Quintet (or sextet if Nagisa is included).