Summary: They would pay any price that was asked, Nimueh whispered at the end, trembling with exhaustion, desperate, pleading, anything, anything at all. Just give her this child. Give her the son he stole from her. 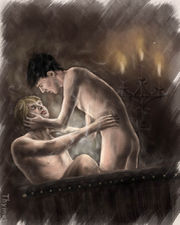 dyaoka podficced the story[5] and cybel turned it into an audiobook. The podfic is 2:13:41 hours long and available at the Audiofic Archive.

Story banner by Thymus (2010). Each banner separately is also a section header in the story.

TaiD translated Tintagel for the Russian Merlin Big Bang 2010.[6] Ksans (portrait of Arthur, illustration of Ygraine and Nimueh with baby Arthur) and Thymus (3 banners, Merlin/Arthur bathtub scene) created stunning fanart for Тинтагель (all embedded in the story) and algine made a fic trailer[7] that beautifully mirrors the epic atmosphere of the story and uses external footage that's just perfect for this purpose. The trailer is 1:47 min long. (The feedback post for translation, art and trailer has the trailer and a GIF version of the three banners by Thymus embedded in the entry.[8])