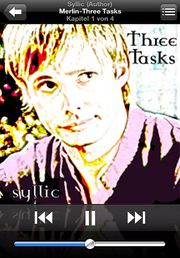 Summary: Arthur is the Royal Arbiter for Suitable Suitors' Disputes. He (and his trusty companion, the golden-dragon-tasselled hat) alone can determine who is fit to woo royal servants and other assorted courtiers in Uther's court. (In light of the preceding sentence, the following may not appear to be a truthful statement, but: not as cracky as that makes it sound. Really.)

pennyplainknits podficced the story[1] and Cybel turned it into an audiobook. It is available at the Audiofic Archive. Podfic summary: "In which Arthur is the Royal Arbitor for Suitable Suitors Disputes, Merlin is the subject of said dispute, and Arthur is resplendant in lilac."

cellophane_ria made a cute illustration that shows Arthur wearing his lilac robes and Merlin carrying a small wooden chest.[2]