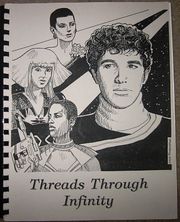 cover by Leah Rosenthal: "Leah Rosenthal drew the black-and-white cover, entitled "Del's Angels"; in keeping with a number of the stories within, it features Tarrant, Servalan, Dayna, and Zeeona. The cover's quality sets the tone for the remainder of the illos." -- from the review below 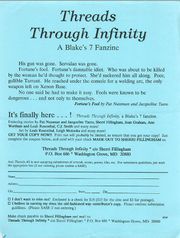 Threads Through Infinity is a gen 186-page anthology of 25 stories and poems.

There were many comments by fans, and by the zine's editor, in The Neutral Arbiter during 1991 regarding how difficult it was to fill this zine.

In December 1991, the editor was undaunted and wrote in "The Neutral Arbiter": "Always a glutton for punishment, I'm coming back to do a second issue."

The second issue was formally canceled in late 1992 after Sherri Fillingham and Pat Nissan announced that the letterzine, The Neutral Arbiter, was ceasing. Tribs were mailed back to their submitters. [1]

"Impractical Joke" is an extremely silly story about the crew getting fed up with Avon's superiority complex, which they decide to deflate by pulling a nasty practical joke on him, which succeeds beyond their wildest dreams, until Avon figures it out. It leads him to exact a particularly horrible revenge on all of them. Yuk yuk Sort of a "hurt/pie-in-the-face" kind of story. [2]

Linda Terrell once complained in the newsletter "Federation Archives" that no one ever seemed to consider the clone to be anything but a plot device so Blake could survive Gauda Prime, and suggested that someone write a story in which the clone's personhood is seen. The story appeared in a zine I have-- possibly _Threads Through Infinity_, but I'm not sure-- anyway, Blake had made a friend of the clone, whom they called Roj, and was Really Pissed Off when Avon killed him. A nice change from all of the joyful reunion PGP stories one gets. [3]

In general the tone of Threads Through Infinity is dark; a few of the stories are downright grim. But overall the quality of the writing is high, and the zine is well worth a reader's time. Highly recommended.

Leah Rosenthal drew the black-and-white cover, entitled "Del's Angels"; in keeping with a number of the stories within, it features Tarrant, Servalan, Dayna, and Zeeona. The cover's quality sets the tone for the remainder of the illos. Along with more Rosenthal, there is art by Yvonne Beever, a Michael Coffey cartoon, some nice woodcut-like effects from Leigh Moto'oka, and a series of clean-lined portraits by Isoline Sanderson that do not look as if they were done from the same boring set of photos.

The zine was prologued with "Evensong: Avon," by Jacqueline Taero, a still and poignant PGP poem. There was additional poetry by K. Ann Yost, Melissa Mastoris, Michael Macomber, M. S. C. Raugh, and Melanie L. Monk. My favorite offering was "Night, and the Catching" by Shoshanna Green, a look inside of Avon's mind immediately after "Rumours of Death," in which Green used marvelous unusual imagery.

Stories: "The Rap-Up" by Leah Rosenthal and Ann Wortham is a hysterically funny GP alternate.

"A Step Between" by Jean Graham looks, in a non-sentimental way, at changes in Tarrant and Vila's relationship after Vila saves Tarrant's life on Terminal.

Barbara Adams' "Ripples" is a creepy and tragic pre-"Blake" alternate, that shows what might have been the outcome of fourth series had Avon actually being as crazy as he sometimes appeared. Interestingly, she works from Soolin's point of view.

"Heroism, it seemed, was contagious." Mary Raugh's "Rogue" is an action story notable for an excellent plot idea: Blake suggests that Avon try to learn how to set mutoids against their officers. The story introduces a mutoid who has recovered his memory (male, presumably because since we are shown fewer male mutoids in the aired series, one can assume they are less stable). The mutoid, Bastion, is a rough parallel to Blake. Avon, Vila, and Blake are all well-written and have good parts.

"The Stronger Man" by C. K. Smith is a two-page Gan story, one of the best vignettes on that character I've seen.

"Once Upon a Mind" by Sherri Fillingham is a PGP involving a mindship, an idea similar to that used by Sheila Paulson in her epic Jabberwocky series. Tarrant is the main character, and my minor nitpick is that his name is misspelled as Tarrent throughout, probably due to some search-and-replace error. The mistake is corrected in the companion story, "Meanwhile...." Of the two, I preferred the latter, which is told in flashback. Avon "remembers" his work on the mindship, meeting Tarrant as a young man, working with him on the project, which Someone is Trying to Sabotage...until the end of the story it's unclear whether all of this is a dream or not.

"Wolf in Wool" by Alicia Ann Fox is a brief "Orbit" alternate.

"Dayna's Gadget Works Too" by C.K. Smith is set early in series D. Avon tries to remove residual programming left in his mind after "Terminal."

"Impractical Joke" by Tom Beck - "In a funny story, [the readers] will believe any amount of illogic, faulty motivation, ridiculous gaps in explanation, or fantastic leaps in the narrative." Tom Beck's "Impractical Joke" involves a practical joke played on Avon by the rest of the second series crew when he refuses to participate in a benefit for Federation orphans.

"Can't get any worse, anyway. After all this, what can happen in the next day or two?" A lot, when the story takes place after the end of "Warlord." "Comrades of the Twilight" by Lorna B., though possibly the saddest story in this zine, is one of my favorites. B. presents excellent character work with Tarrant and Vila, sitting alone in the wreckage of Xenon Base.

"Fortune's Fool," by Pat Jacquerie and Jacqueline Taero, is one of the "darker side" PGP pieces in Threads Through Infinity, and definitely one of the crown jewels. Another Tarrant story, it also features Servalan, who has experienced her comeuppance at the hands of her insane chief advisor, Avon. A lot of violence is implied, but little is actually shown; there is just enough to bring out the ultimate humanity of Servalan's character, and demonstrate the power and madness in Avon's. It was fun to see Tarrant and Servalan work together as a team. Definitely a good, original story, with a revelation at the end to Explain All. [4]