Thoughts on Darkover, Star Trek and Canada is a 1974 essay by Jennifer Bankier. 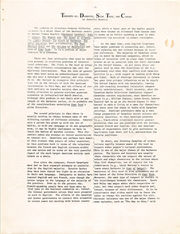 Jennifer Bankier was also involved in the first Canadian feminist zine The Witch and the Chameleon; the first issue of that zine had been published a month before.

The problem of relations between differing cultures is a major theme of the Darkover novels by Marion 7immer Bradley (Darkover Landfall, Star of Danger. The Bloody Sun, The Sword of Aldones, The Planet Savers, TheWinds of Darkover, The World Wreckers, and, peripherally, The Door Through Space and The FaIcons of Narabedla) and also of Star Trek. It is a problem of major interest to a Canadian.

There are four principles that must be taken into account in resolving problems of intercultural relations.

The first is the need to recognize that different circumstances may call for different institutions. Thus the form of government that best suits an underdeveloped country may not suit a developed country, and vice versa. It is the failure to recognize this principle that led to the failure of both the American intervention in Viet Nam, and the efforts of certain radicals to transfer tactics that were highly effective in poverty-stricken agrarian economies to industrialized North America. Although this problem is not dealt with at any length in the Darkover series, it is probably one of the considerations underlying Star Trek's prime directive.

The second principle is that there is morally nothing to choose between many of the differing customs of different cultures. However once a person has grown up with one set of habits, or with one language or in one geographic area, it may be highly unpleasant to have to learn the habits of another culture. This discomfort makes any attempt at forced assimilation an immoral act. Canadians are perhaps more aware of this element than people of other countries; we face problems both in terms of the relations between the French and English cultures within our own nation and in terms of the very powerful impact of the much larger American society upon Canada as a whole.

The third principle is the need for people to be open-minded to the ideas and achievements of other cultures so that they may adapt whatever may be of value to their own needs. One of the problems faced by the people of Quebec in gaining access to the levers of economic power was that until recently the conservative nationalists who controlled the government and the Church would not accept adaptations to the educational system designed to teach modern technical and managerial skills. Present day Quebec "independentistes," in contrast, have mastered these skills as a result of the Quiet Revolution of the early 1960's, and are in a much better position to achieve their goals of preserving the valuable elements of their culture, and their language.

Similarly, in the Darkover series, both Valdir Alton (Star of Danger) and Regis Hastur (throughout the series) are prepared to adapt or use Terran ideas and techniques where these may be of value, while still preserving the essential elements of their own society; and the chief of the trailmen was prepared to accept the use of fire, once Larry had demonstrated that it could I be used in a way that would not destroy the forest (Star of Danger). Jay Allison, who was not prepared to accept his trailman childhood, had to learn to do so (Planet Savers). This theme has received relatively little consideration in Star Trek.

The fourth consideration is that even taking the above three principles into account, there may occasionally be societies or governments whose behaviour is so flagrantly immoral as to justify the intervention by outsiders. Present-day examples are South Africa with its racist oppression of a majority of its population for the exclusive economic end social benefit of a minority, and Nazi Germany with its policy of genocide. However, in view of the first principle, such an intervention should be made only after a great deal of investigation and thought, and in such a way as to minimize adverse effects on the society in question.

This problem is one of the major issues raised repeatedly in Star Trek, although it is not considered in the Darkover series. Kirk's major fault lies not so much in his repeated 'violations of the Prime Directive, but in the fact that he undertakes them on an ad hoc basis, without prior consultation of the Federation Council, which surely ought to be the body responsible for such a momentous decision, and without any consultation with sociologists or other experts as to the best way of making the intervention. It would seem likely that one of the major reasons for the existence of the Prime Directive is precisely to prevent such uninformed intervention by Starship captains acting on the basis of their personal preferences.

Taking "The Apple" as an example (and leaving aside the difficult issue of whether the Prime Directive or the preservation of a starship should have the greater priority), even if one accepts Kirk's puritanical position that death, birth, and the patterns of human culture are preferable to immortality, peace, beauty and innocence (a position that might well by challenged by many presentday young people) it is hard to believe that the transition would be anything but utterly traumatic for the people of Vaal if it was accomplished in the abrupt manner described in the episode. It would be infinitely preferable if the change could have been made gradually after thorough preparation, so as to give the inhabitants time to adjust.

In view of this, it is hardly surprising that I many American science fiction writers seem to find it impossible to portray a truly alien culture. Most sf novels show twentieth century Americans, disguised as human colonists or alien creatures, coping with altered technology or slightly changed geography, animal life, or political or economic structures. There are, of course, exceptions to this rule, such as Samuel Delany or Ursula LeGuin in the sf context, and Jacqueline Lichtenberg among ST writers, but the I problem remains widespread. As John Brunner pointed out at Torcon, many sf writers are unable even to properly extrapolate the social impact of technological change.

The result of the United States' position of world dominance, therefore, seems to be a tendency toward the kind of cultural blindness demonstrated by Captain Kirk in "The Apple." It is iinteresting to speculate about the power balance within the Federation that would be necessary to produce such a trait in an otherwise intelligent man, particularly in view of the fact that Kirk does not seem to have been brought to book for his more unjustified violations of the Prime Directive. One cannot help suspecting that Jacqueline Lichtenberg's apparent assumption that humans dominate Star Fleet, if not the Federation as a whole, is correct, resulting in a diminished human perception of the possibility of truly alien but socially valid cultural differences. The fact that Spock had to go to Earth for his Star Fleet training would tend to support this possibility.

One of the major virtues of the Darkover series is the possibility that it may bring to the attention of American readers the fact that there is no easy solution to cultural conflict, through assimilation, or any other means. This is particularly important, since many smaller nations at the present time occupy a position relative to the United States similar to that which Darkover occupied vis-a-vis the Empire in that even the most meritorious intervention can have destructive cultural effects unless it is carefully planned. For example, it is hardly likely that the non-English-speaking nations would take kindly to a suggestion made by Dr. Asimov in one issue of Fantasy & Science Fiction that English become the world language (a development which some Star Trek scripts suggest has taken place). I am sure that most French Canadians would react with fury to this possibility, and many other linguistic groups would feel the same, since a person working in a language other than his own is likely to be at a severe disadvantage. If there is to be a world language it will have to be an artificial one like Esperanto, so that all linguistic groups will have to make equal sacrifices in the change.

In any event, it would seem likely that fans of Jacqueline Lichtenberg's Kraith series would enjoy the Darkover books, since they both deal with complex problems of inter-cultural relationships. It is to be hoped that honest discussion of such problems will lead to their reduction, if not their elimination.