The Temporal Times is a gen time-travel anthology that has many crossover stories.

It is "The Official Journal of the League of Professional Temporal Perambulators." 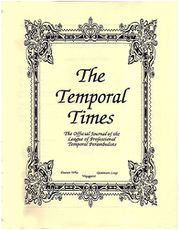 The Temporal Times 1 was published in 1991 and contains 76 pages.

The Cliff's Edge leaps Sam into a miniskirt in '69, the day before the first moon landing. Sam is Lynn Adams, who works for Mirabel Thorn. Mirabel Thorn was once a famous actress, along the lines of Ava Gardner or Lauren Bacall. She's due to die in two days, and there's a secret in her past Sam has to figure out and help her deal with in order to save her. Meanwhile, something's going on at the Project — Al assures Sam it's nothing, and Sam almost buys this until Al gets shot and dragged out of the Imaging Chamber by persons unknown. For some reason I couldn't connect with this one. Right at the beginning Al tells Sam about Mirabel's first husband ~ his life long dream, when and why he died ~ but even though Al knows all these details he doesn't mention anything pertinent to Sam's 'assignment'. Presumably Ziggy doesn't feed him the information, but it strikes me as unlikely that Ziggy would have access to aspirations and not something major like Mirabel and David's location when they broke up. But even with the information given I had it all figured out long before Sam did. This usually isn't a problem, but for some reason I never connected with the characters. The story read somehow like a writing exercise, with every scene serving its function but no life behind it. Part of this may just be that Mirabel and her situation just can't compete with Al getting shot. But the subplot wasn't particularly satisfying, either. Al doesn't tell Sam much, then when he's shot Sam gets quite upset, but hasn't started dealing with it at all when Lynns friends drug him to help him sleep (which is part of the reason he's so slow putting things together). When he wakes up he worries a bit, wondering if Al's alive, then sort of sets Al aside and focuses on Mirabel's problem. Admittedly, this is the sensible thing to do, but I expected something a bit more. Serious angst or soul searching or recognizing what Al means to him or something. And there wasn't any of that when the guys get back together either. What's the point of shooting Al if it doesn't lead to great angst and revelations? And why was Al getting shot basically a subplot? Why wasn't it the main plot, or at least closely tied to the main plot? Granted, Sam can't be there fighting with Al or what have you, but we do get a scene or two in the Project, and there could have been a nice reversal of Al being in big trouble while Sam was helpless. Knocking Sam out really wasted that chance. And Mirabel's story didn't mesh well with what was going on between Sam and Al, didn't refiect on it or add to it or give Sam a new perspective on things ~ they seemed totally unrelated, which seems to me a total waste. Basically, this story frustrated me. Then again, if you're not looking for angst or character revelations or that kinda emotional stuff, maybe it'll work for you. I think the Mirabel stuff might have worked if I wasn't so aggravated by the subplot.

The other QL story is Birthdays, Sam leaps into an 89 year old man in a nursing home, and he needs to help the woman across the hall. If Sam doesn't get the woman and her daughter back together, the woman's granddaughter is going to run off with Sam's grandson; he'll end up dead from a drug overdose and she'll be stranded in the big city. Not much Sam and Al stuff, and the original characters are not terrifically involving, but the story moves along at a nice clip and it's a shortie.

I'd pass on this zine unless you like the other series, since the QL stories aren't first class and there's only two of them. [1] 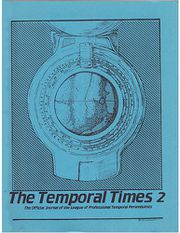 The Temporal Times 2 was published in May 1993 and contains 94 pages. The art is by Deborah M. Walsh (front cover) and M.D. Bloemker. 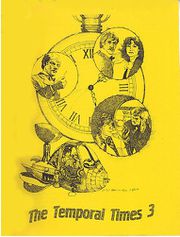 The Temporal Times 3 was published in May 1996 and contains 76 pages. The front cover is by Deb Walsh.