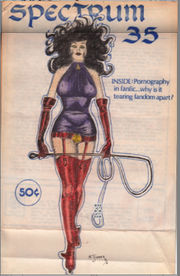 One result of this fan discussion were decisions throughout Star Trek fandom to label any fanzine with explicit sexual material as such, and not to knowingly sell such material to minors by requiring an age statement for purchase. A decade later, when the Surak Awards debuted, zines nominated were divided into two categories: "general" (from the MPAA's G rating, which became gen), and "age statement required".

Modern readers should keep in mind that in 1977, the anti-porn, anti-slash view in Star Trek fandom reflected that of most people in mainstream American culture. Homosexuality was viewed as a pathology, associated with child molestation. In psychiatry being gay was a mental illness with a specific diagnostic code. In the wake of the Sexual Revolution of the 1960s, heterosexual pornography was becoming tolerated, but literature and film describing homosexual relations, even if not explicit, was considered to be pornographic and indecent by the general public. It was illegal to send such works -- fanzines included -- through the U.S. Mail. In many states, including Michigan, sodomy laws prohibiting homosexual acts were still in place, although several gay politicians had been elected to city councils in Ann Arbor and East Lansing. The passing of a gay rights ordinance in Dade County, Florida that year had sparked a nationwide anti-gay backlash led by conservative gadfly Anita Bryant. [1] This convention, and this incident, did not happen in a vacuum.

The controversial panels were Kirk and Spock: Do They or Don't They? and Pornography and Sex in Star Trek. These were the most heavily attended and enthusiastic panels at the convention.

The SeKWester*Cons were not like the huge gatherings associated with the words "Star Trek convention". They were more like informal parties or family reunions, with a little over a hundred attendees each. According to organizer Paula Smith, there were no attendees under the age of 16.

The K/S panel was recorded and later transcribed by fan historian K.S. Langley and published in the fanzine Legacy #1.

While the debate about K/S certainly had its start in smaller ways among fans, it was a single con report, more an Open Letter, from Mary Lou Dodge, publisher of Delta Triad (a Star Trek zine that might receive a mild "R" -- adult themes and heterosexual situations, but no explicit narrative) that set off much discussion. Dodge, horrified by what she experienced at the SekWester*Con, wrote to Menagerie #12 in May 1977.

Since I came back from SeKWester*Con, I can't seem to get myself back to work.... All the joyous memories of meeting old and new friends, or of the delight in the charming Saturday night sketches—everything is being smothered by a flood of resentment.... I do not enjoy being invited to a Star Trek convention, only to find instead it is a pornography con; I do not relish having pornography shoved down my throat! ...For the first time, last weekend, I was ashamed of being in fandom.... I don't know how this sea of sludge can be stemmed...better to outlaw the zines completely than to see them destroy Star Trek, for I couldn't even watch it this week, I find it depressing, after seeing what fandom has brought it to. That's it—I'm mad, and I'm getting madder every day...and I'm not the only one. There were a lot of tight-lipped people at the Con. Somebody owes somebody a big apology to real Star Trek fans." [2]

There were, of course, many responses from fans regarding Mary Lou's letter, ranging from agreement to anger and derision. Many of these letters were printed in Menagerie, Spectrum, and Interstat.

Most fans expressed the opinion that Mary Lou was overreacting and that the entire convention had not really been dedicated to X-rated material but to open, uncensored discussion of all topics.[3] Paula Smith pointed out that the committee had been unable to find enough people for the anti-slash side who were willing to sit on the panel on K/S -- they'd had to be "drafted."[4] One of those panelists, Theresa H, revealed that she and other anti-slash fans she'd spoken to had felt intimidated by some of the people and attitudes on the pro-slash side.

What do you mean you had to draft someone for the con side of the K/S panel? I volunteered. If you'd had to draft someone, you certainly wouldn't have picked me. While I don't condone Mary Lou's wilder statements, I agree with her anger and disgust over S-Con.

As for being--or not being--the most stalwart defender of my position on the panel, I would agree with you that I didn't do too well. There are several reasons. First, Leslie Fish is a very intimidating person. Sitting next to her did not help my courage in the slightest. Second, hearing Amy Harlib declare herself neutral rather than con, perceived at the time as something of a cop-out, didn't help much either. Third, prior to the panel, I had discussed the matter with quite a few people who indicated basic agreement with me, but who all refused to show up, primarily because they were afraid to get emotionally involved--their words. This lack of support also did not help. Finally, I am very poor at public speaking; unless I know I'm among friends, I get extremely nervous. If I may say so, you are extremely fortunate to have had any con side at all. [5]

From Care to Debate That? Broadside:

Okay, grab the chair, we're going into warp. Seriously, though. What gives any fan (or group of fans) the jurisdiction to declare what is "noble" and what is "scum" in Treklit? Who has been appointed arbitrer of decency in fandom? Since when are one fan's characterizations "true," and another's "borrowing someone else's creations and returning them covered with slime?"

One of the eternal fascinations of Trek fandom is fleshing out our beloved characters. And that always involves extrapolation. Kirk doesn't like breakfast, but he eats it so as to set a good example for the crew. That rings true to me, but it's an extrapolation. Vulcans eat meals in silence. That doesn't ring true to me, but again, it's an extrapolation.[7] I have my Kirk. My Vulcans. You have yours. The possibilities are astronomical. We tend to take the live series more or less as given, though even there there are direct contradictions in addition to myriad ambiguities. But we want to know more about the Trek characters. We want to know how they eat, think, dress—everything that tells us something about them. And many of us want to knew how they make love—in all senses of that term. That tells us something about them too.

Exploring the Trek characters' sexual relationships is done on many levels, of course. But the levels differ in degree, not in kind. Mary Louise Dodge cannot depict her curiously Victorian, "she-for-God-in-him" Uhura without exploring Uhura's sexual relationship to her lord-and-master captain. Dodge's explorations, which are by no means confined to her adult-rated stories [8], tend to be couched in veiled language. In fact, if there is such a thing as "prissy porn" Dodge is certainly its queen. But her stories are, in kind, the same thing she condemns so roundly in others: the presentation of an extrapolated love (sex) relationship between two characters created by others. If the exploration of a sexual relationship is a sin (and there are many who hold just the opposite), Dodge is in no position to start the stoning.