The Roddenberry Maneuver is a February 1968 essay by Juanita Coulson and Kay Anderson that was published in Yandro #168. 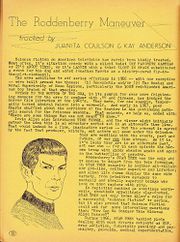 first page of this essay, illo by Juanita Coulson

The essay With Jaundiced Eye was also in this issue of "Yandro."

Science fiction on American television has rarely been kindly treated. Most often, it's situation comedy with a slight twist (MY FAVORITE MARTIAN or IT'S ABOUT TIME), or it's LASSIE with a twist (LOST IN SPACE substituted a robot for the dog and added Jonathan Harris as a hickory-cured fly-in-the-plot-ointment).

The more ambitious tv stf series offerings in 1966 — with one exception — were built around two themes: (l) Xenophobia and/or (2) The Mental and Moral Superiority of Homo Sapiens, particularly the 1005 red-blooded American boy branch of that species.

VOYAGE TO THE BOTTOM OF THE SEA, in its search for ever more frightening menaces for the crew to conquer with .44 and fireaxe, has dredged the horror film libraries of the 1940's. They have, for one example, temporarily turned Admiral Nelson into a werewolf. And early in 1967, poor Kharis shuffled about the corridors of the Seaview in his continuing pathetic search for the Princess Anankha. That episode, so help us, ended with: "There are some things Man was not meant to know."

Irwin Allen also introduced TIME TUNNEL, and the viewer might initially gather the idea this is an adventure series set in an alternate time line. That would indeed be an imaginative series but the concept is marred by the fact that producer, writers, and actors all seem under the delusion they are meddling with the events, past and

future, of our own time stream. As it is, it's lucky they are in an alternate past, not our own — for in each episode the heroes tromp with giddy abandon again and again on the butterflies of paradox.

Roddenberry's STAR TREK was the only stf tv series to depart from the twin formulae. On STAR TREK, humanity is neither all-villain nor god-like, neither superior nor inferior; and alien life forms display the same wide variety, from primitive savagery to mentally and morally superior beings who look on homo sapiens with pity.

In depicting mankind as sometimes worthwhile, sometimes appallingly clay-footed, STAR TREK not only broke Allen's rules for a successful "science fiction" tv series, but it also proved that Science Fiction could ask far more interesting questions than: "How Can We Conquer This Hideous Alien Menace?"

During 1966, STAR TREK tackled plots dealing with such diverse subjects as ESP, drug addiction, futuristic penology and psychiatry, genocide, medical experimentation, extraterrestrial diseases and chemicals, and the conflict between man and machine. Its aims were frequently very lofty, and it did not always succeed. But surprisingly often STAR TREK matched or even surpassed the efforts of major film companies (who work with comparatively limitless time and budget allowances and big name casts and promotion).

In excellent, mediocre and poor episodes STAR TREK has featured adequate, occasionally very fine direction — one symptom of which has been the fine point honing of the throw-away line, the throwaway business. During an involved scene, an almost overlooked intercom will report some, piece of equipment malfunctioning, and mid-dialogue the efficient Scots engineer will depart, muttering, to correct this error while the rest of the cast smoothly dialogues the plot line down a totally different channel. (On VOYAGE, the engineer's reaction and the other characters' comments upon it would consume a minute and a half of dialogue, at a modest estimate)

In the first episodes, STAR TREK's Captain Kirk came across as a petty, quick-tempered, sarcastic, stubborn, and resentful man. It is, of course, impossible to judge how much of this character creation was the writers', how much the directors', how much the personal interpretation of actor William Shatner. But as the series progressed, and most notably during "The Corbomite Maneuver", Kirk was a much better, more powerful personality — in command of the situation, quite credible as the captain of a starship. Kirk has done far more with the lead role than did Jeffrey Hunter's Ensign-On-His-First-Adventure portrayal during the flashback sequences in "The Menagerie",

Leonard Nimoy was given an emotionless, half human-half alien executive officer to bring to life, and he was perhaps apocryphally, quoted, saying the role was "impossible". Thanks to Nimoy, Spock is not impossible, nor even unsympathetic. Far from it. Rather than being emotionless, he has developed as a man of admirable emotional discipline and depth of character. Spock allows us sparse glimpses of this fascinating suppressed character, glimpses which tend to excite the viewer to speculate and extrapolate.

A television series should, fairly, be judged on Its total output for it must produce thirteen or more complete dramas within the same of less time than that allotted to big name, big budget films. But the specifications for Hugo awards insist that a television series must stand or fall on a single episode. Very well then; keep firmly in mind "The Naked Time" and "The Corbomite Maneuver", particularly the latter. Those episodes of STAR TREK certainly had no competition from anything else on television during 1966, and they deserve your serious consideration when you are making nominations for Best Dramatic Presentation for the Nycon Hugos.

STAR TREK's "The Naked Time" and "The Corbomite Maneuver" stack up very well against their dramatic competition (and a large amount of their written competition as well, in our opinion). (Granting Sturgeon's Law, two poor, several average ,and two excellent episodes out of a total of fourteen puts STAR TREK above that hoped-for 10% of worthwhile material. We think that excellence should earn "The Corbomite Maneuver" a Hugo, and we hope you agree.