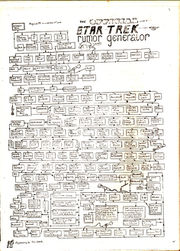 The Official Star Trek Rumor Generatorr is by Jim Steele and appeared in Warped Space #13.