You may be looking for the David McCallum zine, The McCallum Observer.

The Observer is a gen newsletter that began in 1991. Subtitle on the cover, "From the Files of Project Quantum Leap." Even though the fanzine is published by an unofficial fan club, the studios demanded that no fan fiction be included.

The newsletter is published on behalf of the Project Quantum Leap fan club based in Arizona. It contains episode guides, fan fiction, interviews and reviews. As of 2010, bi-annual issues are still being published. See [1].

Karen Funk talks about this zine on her blog in 2006. 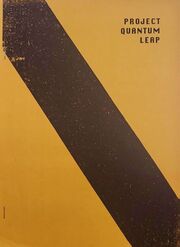 The Observer 1 was published in January 1991 and contains 42 pages.

The editor says this about the cover: "This first cover doesn't look like much, but it's from the first issue of the zine, back around Christmas 1990. It's also an almost exact replica of the cover of a report issued to members of a Senate Committee deciding the fate of Project Quantum Leap in the second season premiere episode, 'Honeymoon Express'." [1]

The Observer 4 was published in the Fall of 1991 and contains 44 pages.

The editor says this about the cover: "This cover is from the fourth issue. I didn't take the photo, and I certainly didn't create or design one of the premiere news magazines of all time. But I did design this parody of their distinctive covers. It refers to a line of dialogue in the pilot episode, in which Al tells amnesiac Sam Beckett that "Time Magazine even called you 'the next Einstein.'" I sent a framed copy of this to the show's production office, back in the day." [2]

Of note in this issue is the fact that the fan club, which formed 'unoffcially' earlier in the year was now being threatened with closure in favor of a studio sponsored official fan club. As of issue #4, the newsletter stopped accepting subscriptions past issue #8 due to this uncertainty. According to one MCA-Universal representative: "We're not shutting you down, we're merging you in." The newsletter's editor commented: "...it's far from clear to us what that means. If copyright stops us from publishing and 'clubbing' what will that mean for The Imaging Chamber, the Quantum Quarterly, the Quantum League, and Leapin' In? Will all our fan efforts be replaced by one slick official newsletter....Oh boy, we hope not."

The Observer 7/8 was published in the winter of 1993 and contains 86 pages. It is a double issue.

In the editorial, the editor apologizes for the delays in publishing the newsletter: "Right now I am trying to get The Observer, The Hologram [a Doctor Who newsletter], my fan novel Paradox and Doctor Who zine Tardis Time Lore finished.

Later in the newsletter, the editor comments briefly on the threatened studio shut-down of the fan club: "Sixteen months ago, we didn't know whether Universal was about to shut us down. Now it looks as if we and Quantum Leap are both going to be around for a while yet.

close-up of cover of issue #9

The Observer 9 was published in the summer of 1993 and contains 48 pages.

The editor says this about the cover: "Now we come to the best cover I ever did, certainly the most ambitious and labor-intensive. Back in 1993 I did have access to PhotoShop, unlike now, and worked on a Mac. On the other hand, it was 1993, a long time ago in terms of technology. I replaced every face, every object on the cover of The Beatles' Sergeant Pepper's Lonely Hearts Club Band with someone or something Leapish. I had trouble photographing the glossy cover well, but you get the idea... The four Beatles in the center are QL creator Donald P. Bellisario, stars Dean Stockwell and Scott Bakula, and writer/co-executive producer Deborah Pratt. The four waxwork Beatles to the left have been replaced by the four founders of Project Quantum Leap the club. The rest of the cover has guest stars, writers, producers, fans, a crew T-shirt, Dean Stockell's Star on the Hollywood Walk of Fame and a Panavision camera. And Look! Teresa Murray's holding a copy of Observer 4 in her waxwork hand!" [3]

Of note: over the summer Quantum Leap was canceled and several tie-in merchandising projects were dropped. The Observer announced that one project, the 1994 Quantum Leap Calendar, would be replaced with a fan made calendar.

The Observer 10 was published in the summer of 1994 and contains 40 pages.

The Observer 11 was published in the winter of 1994 and contains 46 pages. The newsletter switched to bi-annual publishing.

The editorial discusses the many new online options available to Quantum Leap fans, including Prodigy and AOL, along with newsgroups and e-mail. The editor also asks if readers are interested in opening up the newsletter "to selected fan commentary other than my own? We never included fiction, poetry, or filks and very little art has graced these pages because by and large no one has sent us any. Should this change? I have to warn you I still am not very keen on poetry… "

The Observer 12 was published in the summer of 1995 and contains 44 pages. The first World Wide Web address pages are listed "for those with acess to Mosaic" and other web browsers. In spite of the editor's musings in issue #11 about a change in format, the newsletter remains the same, with no additional letters or content from subscribers included.

The Observer 13 was published in the spring of 1996 and contains 42 pages.

The Observer 14 was published in the summer of 1996 and contains 42 pages.

In the editorial, the editor worries that she is running out of Quantum Leap news to print - she no longer has easy access to the stars and writers to do interviews and interest seems to be shifting away from the show and more towards the "Cult of Scott" Bakula (one of the show's stars). She admits to "a sense of panic that grips me when I sit down to edit another Observer and realize that I am as thoroughly trapped in this role (as editor) as Sam Beckett is in his. Each of us has the same out: choosing to quit, thus denying the needs of others. Each of us refuses to make that choice." 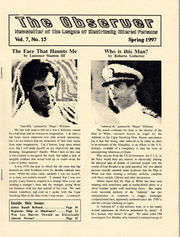 cover of issue 15, subject of some discussion in issue #16

The Observer 16 was published in the summer of 1997 and contains 44 pages.

In the editorial, the editor reports that several subscribers were disappointed with the cover of issue 15. The cover, which provided the opening paragraphs of two mock-articles from a fictional newsletter by and for time travelers, had been mistaken for real articles and there were requests for the completed versions. The editor went ahead and published the full text on the newsletter's website, but then spent another two columns discussing fans and their fanaticism and the possible parallels with suicide cults. The editor concluded that while the majority of Quantum Leap fans were not crazy and were not being influenced by a charismatic cult leader, fans were ultimately responsible for the influence that TV shows have on their lives.

The Observer 17 was published in the spring of 1998 and contains 39 pages. Editor Karen Funk Blocher stepped down and Margaret Colchin took over editorial duties.

This was the first issue that omitted the free advertising and listing section, "Other Voices In QL Fandom/Things For Leapers." A new mission statement was published announcing that the newsletter would be shifting away "periodically from Quantum Leap, towards the careers past and present, of it's stars and guest stars."

The Observer 18 was published in the summer of 1998 and contains 42 pages. No editorial was published but this issue saw the return of the free advertising and listing section, "Other Voices In QL Fandom/Things For Leapers." 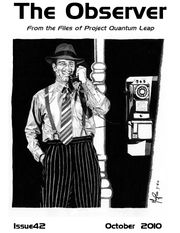