The Limits of Trust 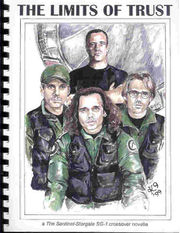 The Limits of Trust is a crossover gen novel published in 1999 and is 177 pages long. The cover art is by Lyrade.

In August 1999, the author of this novel asked a Sentinel USEnet group if they thought this story would be interesting to others:

This is a weird question. I've written a TS/Stargate SG-1 crossover novella set a couple of months after TSbyBS. It is a sequel to a crossover story that was printed in a Stargate zine. It develops into a kind of alternate universe in a way. What I want to know is, if such a zine were printed and the back story was in a zine that didn't have anything else to do with TS, would TS fans feel annoyed? Ripped off? Frustrated? Would it be worth going ahead with it? The novella is much more slanted to TS than it is to SG-1, and Jim is finally captured by a nasty military type who wants to experiment on his senses. I'm just not sure that it's fair to people, considering the prequel story sets the stage for it in a way (it's a story that involves Blair being recruited for a mission with SG-1 when they find a planet that has a Sentinel guarding their Stargate.)

The thing is, I do want to make the story available to TS fans because I let Jim and Blair resolve some issues left over from the series and had fun with it.

And I do think that Blair and Daniel might well have met each other before. I have this fondness for anthropologists and archaeologists in fandom (Jonathan MacKensie is a favorite, too, not to mention Indiana Jones!)

Well, if my beta reader doesn't throw up her hands in disgust, I might go ahead and just post the story on the web.

My story's premise in that zine is that the SG-1 team encountered a sentinel on a planet and Daniel had heard of the concept and had discussed it with Blair at a conference once, before Blair met Jim. So he worked it out that they could recruit him to go. This was right after the deal with Alex, so they figured it wasn't safe for Jim to go, too. Blair got to go through the Stargate, and of course it didn't prove as easy as they thought. Col. O'Neill was leery of Blair's enthusiasm and long hair, but our favorite anthropologist more than proved himself. [1]

Beginning soon after the episode "The Sentinel by Blair Sandburg," Blair realizes that he's not cut out to be a cop -- and that the problems between Jim and himself might just be too big to fix. Besides, staying with Jim and getting a badge is tantamount to admitting that his press conference was a sham, that Jim is indeed a Sentinel. Before his presence attracts the wrong kind of attention, Blair decides he has to leave -- for Jim's own good. But where can a self-confessed liar and fraud go where he won't be run out of town on a rail? In a well-crafted and spellbindingly-told tale, this zine will explore the very limits of trust that friendship can take you to. Can Jim and Blair reach past their problems and recapture the close relationship they once had? Is Daniel's anger and distrust of Jack's motives enough to destroy their partnership and split the tightly-knit team?

This is actually a sequel to another story 'Sentinels', but one doesn't have to have read that to understand this story, cuz I certainly didn't. The set-up in the previous story leaves us with a situation where Blair is known to the SG folks, and knows about the Stargate, but Jim doesn't. And that's really all one needs to know. Oh, and this is set after 'The Sentinel by Blair Sandburg', so beware of spoilers if you didn't know what happened there.

I liked this. I recognised Sheila Paulson from B7 fandom, so I did expect that she knew how to tell a story. Obviously, if you hate either The Sentinel or Stargate then it would be a waste of time reading this zine, but I think it did both of them justice. The theme of trust weaves through it, and characters work through issues. But it isn't just a nice touchy-feely story either! Some life-threatening stuff goes on too. (And indeed, the trust issues wouldn't have occurred without the action anyway.) Maybe some of the characters were a teensy bit too open with their feelings, but it was not too smarmy. And I liked the enthusiasm of Blair; that's more like the Blair I know and love.

Nice cover, and the very few illustrations were very good. [2]