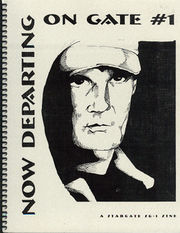 Now Departing on Gate #1 is a gen Stargate SG-1 anthology of fiction. There are 188 pages including stories, artwork, and a puzzle (approximately 180 pages are story). It was published in 1999.

Note About the Title 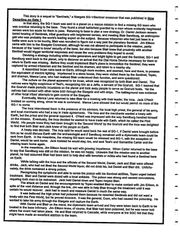 [Sentinels]: This is the first story in what turned out to be a series. When a team sets out from the SGC, they don't always come back. SG-4 went to P4K 621 and are missing. When SG-1 investigate, they encounter a battlefield -- and a sentry with preternatural abilities. Fortunately, Daniel Jackson remembers encountering an anthropologist who mentioned something about tribal guardians... and the SGC decide to bring in that anthropologist as an outside expert -- Blair Sandburg. They'll just pump him for information, and don't actually need to tell him anything... but, of course, things aren't quite that simple, and one thing leads to another. The focus here is, naturally, on Blair and SG-1 more than on Jim, but he has his part to play, with a touch of the mystical. We have yet another of Stargate's transplanted lost civilizations, but with some interesting developments. Blair makes a good diplomat, but where there is politics, there is also foul play. And some good lines. "Between the two of you, I now know a lot more about pre-Columbian dentistry than I ever wanted to," Jack grumbled. There are a couple of things that snag (calling Daniel Jackson an anthropologist, for example, and the way that they figure out far too quickly that Jim is a Sentinel) but this is overall a good solid story. [2]