This fan club was associated with The Patrick Stewart Research Library.

A related club was The Patrick Stewart Network. 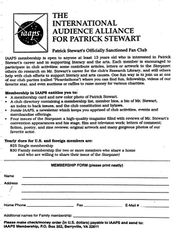 The fan club was active in June 1990 (or before). From a June 1990 blurb in Times v.7 n.6: "FROM STRATFORD TO STAR TREK: Do you think that REAL Starship Captains don't need hair? Well, then the lAAPS is for you! That's the International Audience Alliance for Patrick Stewart. This club is dedicated to the Enterprise Captain with the domed pate and rich English baritone (heard him on any Pontiac commercials lately?), so if you are a Picard-iac, then you MUST join this club and "make it so." Their quarterly newsletter is called "Stargazer" and is packed with performance reviews, convention reports, photographs, artwork, fiction, letters of comment and morel Memberships are $18/year, so send your checks to: Kate Maynard [address redacted]."

Some of its Publications

IAAPS membership is open to anyone at least 13 years old who is interested in Patrick Stewart's career and in supporting literacy and the arts. Each member is encouraged to participate in club activities: some contribute articles, letters or artwork to the Stargazer, others do research on Mr. Stewart's career for the club's Research library, and still others help with club efforts to support literacy and arts causes. One fun way is to join us at one of our club parties (called "Plcardathons") where you can find fun. fellowship, videos of our favorite star, and even auctions or raffles to raise money for various charities.

Membership in IAAPS entitles you to: A membership card and new color photo of Patrick Stewart, A club directory containing a membership list, member bios, a bio of Mr. Stewart, an index to back issues, and the club constitution and bylaws. Inside IAAPS, a newsletter which keeps you apprised of club activities, events and merchandise offerings. Four issues of the Stargazer, a high-quality magazine filled with reviews of Mr. Stewart's convention appearances and his stage, film and television work; letters of comment; fiction, poetry, and zine reviews; original artwork and many gorgeous photos of our favorite actor.

Yearly dues for U.S. and foreign members are: $25 Single membership