The History of Two Conversations (On Paper)

The History of Two Conversations (On Paper) is a Merlin/Arthur slash story by takadainmate (~11,000 words). It won the spring 2009 Merlin/Arthur Fanfic Awards in the category "Best Finding-Out Fic".

Summary: Books are defaced. But it's all for a good cause. Really.

threequarters podficced the story[1] and cybel turned it into an audiobook.[2] The podbook is 1:14:28 min long. such_heights repoded it for tanpopo03 for a charity fandom auction[3] and cybel turned this one into an audiobook too.[4] The podbook is 1 hour 6 minutes long. Никакун (Nikakun) translated the story into Russian for the Arthur/Merlin OTP fest "Две стороны одной медали" (Two sides of the same coin).[5]

In a discussion about the explicitness of fanfic in Merlin fandom someone mentioned the story as an example to support the POV that there does seem to be a pretty good body of non NC17 fics. "The History of Two Conversations on Paper" and "all I wanted was a white knight (i got a prince instead)" were two of my favorite stories getting into the fandom, and still are. They both have pretty low ratings.[6] 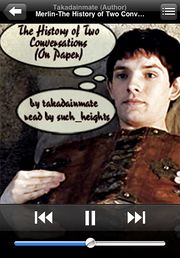 podbook cover by cybel for the podfic version read by such_heights

This was written just after season one ended, so it's got the innocence and optimism of the early days. It centers around hand written notes in Merlin's magic book, and I love that the book itself holds traditional Magic with a capital M ("Ways to curse a thousand generations of sons"), while notes in the margin reveal more down to earth concerns ("Spell for banishing Arthur's hand from my bum" and "You can clean almost anything with it, even though in this book it refers to badgers alone.") I'm a sucker for magic reveal of all kinds, but I particularly like this one and Merlin's subsequent need to cover for Gaius. The writing moves seamlessly between humor and some angst (in the wake of the reveal and with Merlin injured at one point). Both Merlin and Arthur are terrific here. It's funny, and it feels good, and it's one I reread.[11]