The Challenges of Everyday Life

The Challenges of Everyday Life is a Mulder/Krycek series by Orithain. 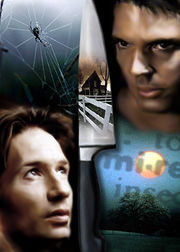 1. Birthday Wishes ~ M/K, Adult-graphic (16K) 01-24-99 Mulder gives Krycek what he really wants for his birthday. A birthday present for Rowanne using a first time and a naughty Alex.

3. Hero Worship ~ M/K, Adult-graphic (15K) 02-15-99 Fox and Alex get to know each other a little better. Response to the TER/MA February 1999 hero challenge. Takes place the morning after Skirting the Issue.

13. Reach out and Touch Someone ~ M/K, Adult-graphic (12K) May 99 Mulder had to go out of town on a case, but he doesn't want Alex to feel forgotten. Response to Infernale phone sex challenge.

15. Drowned Rat ~ M/K, Adult-graphic (16K) 03-18-00 Alex. Fox. A rainy day in the orchard. A wet T-shirt. Use your imagination. Response to the March 2000 RatB challenge. Click on thumbnail for full-size view of the cover created by the Theban Band.

17. Sowing Seeds ~ M/K, Adult-graphic (11K) 01-31-01 Sarah convinces the boys that the kitchen garden should be replanted. Response to the Infernale garden challenge.

Ok, I was on a list and someone asked for recs of non-angsty, happily ever after M/K stories.?! (picture me trying to stifle a choked guffaw, here) What the hell could I rec to them? This story was the only one I could think of that even came close to that and there is some angst here, but the boys do end up happy. It was the only one rec'd. Guess no one else could come any closer than I did. Angst is pretty much a requirement for M/K I have found and I always liked it that way. The person who requested these recs also asked why there is so much conflict and angst in M/K stories. I said 'oh, couldn't have anything to do with Alex killing Mulder's father could it?' That seems to require some getting over and angst ensues. I was wondering if this person watched the show at all and why they read M/K and complained about angst. If you don't like that you are in the wrong fandom. This series is lower on the angst level, though not completely free of it. The boys are totally hot and gone for one another, if that is what you are interested in look no further. The series gets it name, because each story is based on story challenges made on mailing lists and such to write a story with some specific thing(s) involved. Each one tells you which challenge she answered, you'll figure out what the specifics of each challenge were as you read the stories.[1]