The Alternate Universe series, also known as the Kendall-Conner-Kenny-verse, is a series of Smallville fanfiction by Magdelena.

The first story in the series, Secrets Revealed, was written for the First Time prompt as part of "The Bad Sex Challenge" for the thirteenth wave of the ClexFest.

The series was nominated in the category "Best Of Series" at sv_awardz in 2006.[1]

Many of the earlier stories in the series were posted at the Smallville Slash Archive and have since been imported to Archive of Our Own. Others are only available through Magdelena's now-friendslocked LiveJournal.

A series of stories highlighting the antics of the ever-growing Kent-Luthor family (Clark, Lex, Kendall, Conner, and Kenny).

Several stories are written from differing character perspectives, and range in rating from PG-13 - NC-17. There is one story in the arc that is a crossover with the Harry Potter universe. This series was nominated for a TSA award.[2] 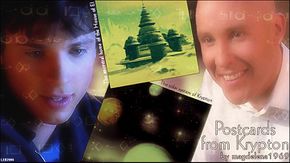 Cover art for Postcards from Krypton by laurab1.