Are you looking for the Starsky and Hutch Virtual Season (online) community?

The Starsky and Hutch Virtual Season fanzines are slash. 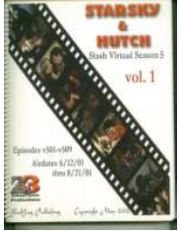 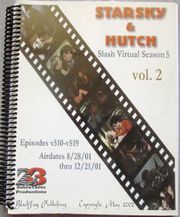 [Faithful to Thee, Cynara]: Why this must be read: Because it's by Jat Sapphire, and she's one of the best. Because she doesn't fill in all the gaps; she trusts to the intelligence of her readers. Because it's long and plotty and angsty and hot and lovely. Because the love between the guys is so gorgeous and so understated. [1] 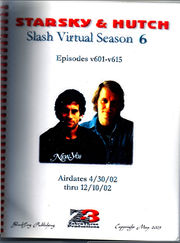 Starsky and Hutch Virtual Season 6 was published in 2003 and has 471 pages.

See reactions and reviews for To Bear Witness. 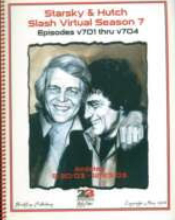 Starsky and Hutch Virtual Season 7 was published in 2004 and has 141 pages. 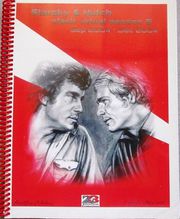 Starsky and Hutch Virtual Season 8 was published in 2005 and contains 170 pages with illustrations.

This is kind of a monumental rec, since there are dozens of stories in this project, all of a really good length. Seasons 5 and 6 seem to be full-length seasons but 7 is maybe half-size and then 8 is just a handful of stories. I guess the whole thing kind of faded out over the years or something - not sure exactly why that happened and it's kind of a shame. [2] Having the opportunity to follow the guys for years at a time in the same fic universe is pretty unique and very enjoyable. There are a bunch of writers that contributed to this, and out of all of them there is only one author that I really can't stand, and thus only three stories out of many that I really didn't like or couldn't stand to read. These authors really think of great situations to put the guys in, and of course new ways to beat them up. ;) There are some really amazing, intense, poignant moments here. Last thing, read the "graphics free" versions of each story in order to avoid the cheesy photo-manips. [3]

The following general guidelines have been developed in the interest of maintaining continuity within the slash virtual season.

Please be familiar with our virtual season canon. If you will be writing an episode later in the series, please read those stories which come before your episode (and are made available to you prior to your writing deadline). The Steering Committee will be checking eps for continuity issues, but your familiarity with virtual season canon will make the process smoother.

Please use your fertile imaginations to come up with some innovative and interesting episodes, but bear in mind that since this is a virtual season, and your work will be part of an overall "tapestry" that must be woven together well, extreme or controversial ideas should be discussed with the Steering Committee prior to writing. We very much want a number of different author "voices", but we also want to maintain a certain "flow" to the season.

Please respect writing deadlines and answer promptly requests for information, review of beta/editing/revision suggestions. The success of the season depends on all of us moving "on schedule", so once we're rolling, please keep the Steering Committee apprised of any potential problem with the meeting of deadlines. If we have warning, we can much more easily shuffle things around to keep our episodes "airing" regularly and on-time.

Please DO NOT discuss virtual season list topics, canon development and other "confidential" issues in other forums. Our list communication is to be considered closed and private. Spoilers will be tossed around freely, and list members are encouraged to communicate openly about their stories and ideas. In order to protect this environment, it's necessary to trust that it is "for our eyes only".

Please don't hesitate to make use of our list resources. We have two medical consultants, a psychological consultant, and probably some experts in a few other fields as well. We're a resourceful bunch who collectively know a lot of "stuff", and we have some terrific researchers/resource folks who have already posted informational messages on subjects ranging from sexuality to weapons and ballistics. If you have a research question, by all means, post it to the list. Consider the list your workshop--all story discussions, questions, requests for help/info are welcome. Please label such posts as "Story Help Needed" or "Medical Question" as a heads-up.

Please feel free to use your fellow list members as a sounding board for your ideas, either as you develop your story or as you're looking for plot bunnies. Many folks have plot bunnies up for adoption, and we're all in this together, so if you want to get some feedback on a plot element or event you're just not sure about, run it by the list. Again, this is your workshop.

Not surprisingly, as we are engaging in a group effort among authors of widely varying tastes and writing interests, and are hoping to appeal to a reasonably broad audience of Starsky & Hutch slash fans, we are asking that you adhere to the following specific guidelines in developing your episodes (NOTE: "major characters" are Starsky, Hutch, Dobey and Huggy):

No death of a major character.

No rape of a major character.

No partner betrayal between Starsky & Hutch (including but not limited to sexual infidelity or domestic violence).

Absolutely NO explicit depictions of any type of underage sexual activity (either through flashbacks or current casework). This restriction is necessary for the legal protection of our website and its authors and administrators. (NOTE: Non-explicit/non-graphic references to such situations involving minors for purposes of a case or memories of a past incident(s) may be appropriate--if you question the suitability of your content, please contact the Steering Committee for further discussion.) This provision primarily applies to "step-by-step" descriptions or the eroticism of such activity in a manner which could be construed as exploitive to minors.

Please be conscious of consistency in the way dialogue is presented. For example, please use moderation with the use of profanity by the main characters. While it is logical to assume they would be more profane than network television allows, authors do vary in their vision of the guys' word choices. Also, please use caution with Starsky's dialogue (this widely varies among authors, which is why it bears mentioning)--he has a New York accent and drops a few "g's" off his "ing" words on occasion, but he should still speak recognizable English and not drown in "ain'ts", double negatives and grammatical errors--he expresses himself much better than this in canon. As with most issues, please try to avoid extremes.

AU's will not be accepted at this time. Our purpose is to create a virtual "fifth season"--which will entail storylines that continue on in the canon universe created by the series itself (with the exception that ours will be slash), and hopefully will have an "episodic" feel to them..

The virtual season will continue the tradition of being set in "Bay City, California", and S&H will be employed by the fictitious Bay City Police Department (affectionately known as the BCPD on all the uniforms in series canon <g>). The only genuine locations you must be concerned with are those used in the actual series canon--for example, street addresses given for "The Pits", the boys' apartments, or other canon lcations. Bay City is a fictional town--have fun with it.

If you will be using a non-major canon character in your episode, you must clear this with the Steering Committee. For example, if you want to bring back an old villain, let us know so we can prevent having three authors all working on "The Revenge of Villain X". Also, your use of series non-major-character regulars and one-time characters may impact other authors' plans. Non-major canon characters are available on a first-come, first-served basis. First one to speak for a character will take precedence in the planning of that character's future, and subsequent authors will be asked to adapt.

Landmarks in the boys' lives will be discussed with the group prior to the beginning of writing our season. Sexual landmarks, as well as "coming out" of any kind, major status changes (like Starsky being reinstated on the force, for example) will be clearly the domain of specific authors--again, determined by volunteering, polls, or some combination thereof to fairly determine and distribute the "goodies" among our writers. [4]