From Fanlore
(Redirected from Soldier: 76)
Jump to: navigation, search

Jack Morrison, also known as Soldier: 76 is a playable character from Overwatch, a first-person shooter game by Blizzard Entertainment.

Jack Morrison joined Overwatch alongside his best friend Gabriel Reyes. Jack was promoted to Strike Commander, which estranged his relationship with Gabriel, who also wanted to lead Overwatch. This animosity eventually led to Gabriel leading a rebellion inside Overwatch, and ended in the Overwatch headquarters being destroyed. Jack was badly injured in the explosion, and suffered scars on his face. He was assumed dead, but now wanders the world fighting evil as a vigilante.

In the short story “Bastet,” an official part of the Overwatch Universe released in January 2019, Ana sees Jack going through photos, and sees an old one of him with a dark-haired man named Vincent. Blizzard Entertainment confirmed that Jack Morrison is the second LGBTQ character in the Overwatch universe (after Tracer). [1] A tweet from lead writer Michael Chu confirms that Soldier 76 is gay: 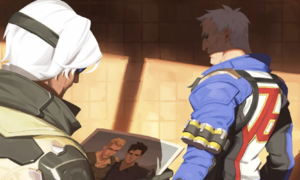 Photo of Jack and Vincent from "Bastet"

Thanks for all the messages about “Bastet”!

Jack and Vincent were in a romantic relationship many years ago. Both identify as gay. ❤️[2]

LGBTQ people and slashers in fandom responded positively to the reveal. Many posts and fanworks, particularly fanart, were made in celebration of the announcement. Much of the works focused on gay pride.

A number of the posts were about solidarity with Tracer[3][4][5][6], the last OVW character to be revealed as gay.

Tropes within fanworks include:

A consistent theme in the Overwatch fandom is portraying Jack as a fatherly figure to the rest of the Overwatch team, affectionately nicknamed 'Dad76', and occasionally 'Grandad76'. This is largely due to humorous in-game voice lines, predominantly an unlockable voice line wherein he says 'Young punks... get off my lawn!'. He also has an in-game spray depicting him on a rocking chair. Headcanons around 'Dad76' especially tend to portray him as Hana Song's father, likely because of her position as one of the youngest members of Overwatch. He is often commonly depicted as a fatherly figure to Fareeha Amari in her younger years, along with Reinhardt Wilhelm.

The juggernaut ship including Jack is Reaper/Soldier: 76, commonly known as Reaper76. This is because they share extensive canon history, and have many in-game interactions. There is some fandom wank over whether this ship is healthy but a majority of the fandom accepts it as a major ship.

[Examples illustrating common tropes; gen works; pairings other than those with their own articles]