The first Snarry Games (originally known as the Snarry Olympics; name changed under threat of lawsuit by scary international corporation) were conceived by djin7 in the wake of the collapse of Detention archive and after the release of Harry Potter and the Half-Blood Prince, when many fans insisted that Snape/Harry slash was now impossible, or at least only plausible if it were very dark and nonconsensual.

Many Snarry fans, however, believed that, instead of destroying the pairing, HBP opened new realms of possibilities that would never have been explored without canonical support. (It's possible that no previous Snape/Harry story had posited that Snape killed Dumbledore while Harry watched. The idea was just too ridiculous; most fans would never have accepted it as plausible.) But several months after HBP's release, the debate still raged—many non-Snarry fans insisted that the 'ship was dead, impossible, only suitable for crack!fic or handwaving "the ending didn't happen" stories.

The Snarry Games changed that. It proved that the Snarry pairing is one of the most versatile in all of fandom—that it can include shmoopy romance or darkest angst, polite tenderness or heinous violence… sometimes all in the same story. And any of those elements can make for excellent reading. Watching the forums and discussions, it felt like the publication of Half-Blood Prince had established a Snarry motto: "No Plot Device Too Extreme." No story feature was impossible: convoluted time travel, shy romance, unexpected traitors, torture (in either direction), mythic elements, matchmaking from beyond the grave, arranged marriage, humour, forced bonding, forgiveness of sins, joyful hope, and of course, mpreg.

Djin7 sent out invitations to several well-known Snarry authors, and then opened up the contest to other volunteers. Originally, this was going to be first-come, first-accepted; by popular demand, it was changed to a lottery system with a 24-hour signup window. Those who did not get a place in the Games were promised first option in the next Games. In addition, some would-be competitors joined the fun by submitting drabbles based on the prompts, which were shared after the stories were finished, during the voting, and when the games were done and the votes all counted, the community so_mod_love was revealed, wherein several people showed their appreciation for djin7's efforts by creating crack!fic or art or poetry.

The Snarry Games final goodbye post was in October 2009.

The Games had an interesting minor but far-reaching effect on LiveJournal's Harry Potter fandom, and some other archive sites: proliferation of skippable warnings. In most fic fandoms, it's common to provide warnings for story elements that many readers wish to avoid, such as character death, infidelity, or torture. However, many Snarry readers prefer to read without those warnings, as they don't want to lose the impact of surprise.. In an attempt to accommodate both groups of readers, the warnings were linked to an offsite page instead of being included in the main story text. This proved useful, but complicated; the desire to allow some fans to see warnings and others to avoid them at will drove the moderators to find a new method; the second Games used the white-text/white-background formatting that's since become very common.

The Snarry Games also inspired similar types of challenges in other fandoms, such as the Remus/Sirius Games, HD Worldcup and Merlin Games.

In 2008, elfwreck compiled 25 of the 44 stories written in the 2006 challenge into a printable pdf. They represent the two teams (Romance and Angst), which had 22 prompts each. The pdf, which contains some color art, is 452 pages. The complete collection, if all the authors had given permission to be included, would have been over 750 pages. 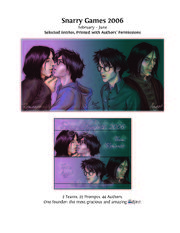 A Test of Wills

The games were wildly popular. Enough interest spawned a Snarry-themed art contest later that year—again, Angst vs Romance, but a different set of options for prompt choices. By the time for next Snarry Games for fiction, it was obvious that Romance/Angst wasn't the only way to divide Snarry, and it had different teams (Wartime and Postwar), to be completed just a few months before Deathly Hallows was released. The second Snarry Art Games followed, and as of this writing, the third fiction games—Team Dragon vs Team Phoenix—have their prompts and are busily writing as the opening ceremonies, with crack!art and banner exchanges, have commenced. (TBA)