Sexy times with Wangxian (sometimes known as STWW or STWWX) is an Untamed/Mo Dao Zu Shi fanfic by virtual1979 that is perhaps best known to fandom for the large number of tags included in the work on AO3. More tags were added with each new chapter, and the fic eventually achieved an all-time high of approximately 4400 tags, before most tags were removed in April 2021.[1] Although the fic had been a WIP since 2019, it passed a threshold of panfandom notoriety in early 2021.

virtual1979 started tweeting about the situation in mid February, first under cruisin_forever, then under virtual1979. The author was suspended on AO3 for threats on February 21[2] and cross-posted their fic to dreamwidth a week later[3]. As of April, the version on dreamwidth was friendslocked, but contained more chapters than the version on AO3.[4]

Just as what the title says.

In mid-February 2021, the author's summary was updated to include in bold:

Note to readers from fandoms OUTSIDE of The Untamed / CQL / MDZS: This is a Wangxian-centric fic which may branch out due to crossovers!

Sexy times with Wangxian is the longest fanfic in the MDZS fandom on AO3. The longest AO3 fanfic overall is a five-million-word Hobbit/Lord of the Rings/Silmarillion work titled At the Edge of Lasg'len, which claims to be "the world's longest English language narrative fanfiction".[5] See Longfic for more story length record-holders.

Tags and Other Metadata 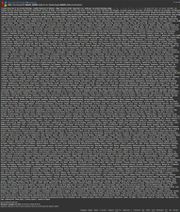 Screenshot illustrating the scale of tagging, created by twitter user espanyeol and shared in many places.

The author updated both the story and its metadata frequently.

The Wayback Machine copy of the fic from just before it was hidden on February 21, 2021 displays 2300 tags, including 14 fandom tags.[6] Various fans were tracking the tag counts in February and reported on their findings: As of February 15, 2021, the work had 1754 tags[7], increasing from 1598 on February 2, 2021[8]. In April 2021, twitter user dudski created a google sheet containing all tags on the work, including the many tags added after the work was hidden.[9]

The story has been marked complete for some time, but AO3 users have complained that new chapters continue to be posted frequently, causing the work to reappear at the top of many common tags. The large number of porn-related tags has resulted in many fans outside the fandom becoming aware of it. In February 2021, the author also added tags for every other MDZS relationship, so MDZS fans of other ships reported suddenly seeing the fic in their tag searches; by mid-February, the author had also begun tagging other fandoms, including Heaven Official's Blessing, The Scum Villain's Self-Saving System, BTS (K-pop group), Legend of Fei, and RPF.[12]

AO3 restricts tag length to 100 characters, but there was no apparent limit on the number of tags allowed. As a result, the work took up a large amount of screen real estate on the search results and tag pages that many fans use to browse the website. Some users reported page loading problems on their devices. Fans who use screen readers reported that the number of tags on the fic made the site unusable for them. According to an AO3 Support volunteer, "We've heard anecdotes that the work's appearance in search listings negatively affects site and browser performance, but haven't had enough reports with specific device information that would let us conclude if this is an intermittent browser issue or a larger problem."[13] One reply to a submitted report explained that pages were structured in such a way to enable screen readers to skip the wall of tags.[14]

These workarounds circulated on sites such as Twitter and Tumblr, with some users of the site creating tutorials for how to apply the settings shared. A few workarounds were posted in the Fanwork Research & Reference Guides tag on AO3 itself:

Some fans commented on the work itself to ask the author to fix the completion status or tagging issues. Other comments were violent.[17] A comment from the author:

This fic started as a fannish project to write some fluff and humour with a good dose of R18 content as a trilogy, with the third and final part to be kept alive forever. Early on, the commenters were friendly and nice, and it was a good environment to explore ideas and write fantastic stuff featuring Wangxian.

A year later, through the Covid-19 pandemic, a million words was achieved with nearly a thousand comments, I continued to write despite receiving more and more hostile feedback from trolls and registered users. The more famous a fic is, the more unwanted attention it attracts. I already learned how toxic the fandom is, and how terrible some people are - both fans and non-fans -, and how to deal with them with my own "fight fire with fire" ways :-)

After several rounds of clashing with these unwanted guests and visitors, unfortunately the comments by the commenters got out of control, and became very aggressive and harassing, so all comments have been wiped out to start anew.[18]

The author stated in their FAQs that they would not remove tags, split the work into a series, or mark it as in progress.[19] In response to reports that the fic was crashing people's browsers, the author said, "I'm sorry but I cannot help you with your technical problem. The site is working fine for me."[20]

In February 2021 the author first moderated comments on the fic; around the same time that the author began tagging other fandoms and updated the summary to indicate crossovers, they turned off comments entirely.

Fans have been arguing over whether the tags violate AO3's rule against "threatening the technical integrity of the Archive"[21] because the work caused browser problems for some users. Other fans were frustrated by the inclusion of tags that didn't seem relevant to the story, but AO3 requires only that fandom tags--not character, relationship, or additional tags--be accurate.

So many people submitted Abuse reports that the system wouldn't allow further reports.[22] (AO3 only allows a few reports per work to prevent mass-reporting campaigns.) Some people submitted support requests instead, but official responses explained that the fic was not a policy violation.[23]

On February 21, the fic was hidden and the user account suspended for a month, but for posting threats, not because of the tags.[24][2] A screenshot on twitter showed a note in which the author stated they hoped the people bothering them in comments died of COVID.[25] The fic was not visible again until April 13, as documented by twitter user dudski, who said they received update notices from AO3 after the one-month suspension ended, but couldn't access the new chapters.[26]

In May 2021 the fic title and summary were changed multiple times. Some of the title changes included the addition of slurs, and at least one summary update changed the text to include a carriage return after each character, which increased the work's screen real estate on the works search page.[27] Twitter users said they had tried reporting the work again but that it was already maxed out on reports. The matter was also discussed on fail_fandomanon, where people were divided on whether the author's actions could or should be against the terms of service: see this 2021-05-26 thread. And on reddit one user commented, "The child wants attention and people are lining up to give them it."[28]

In contrast with the original, the "bland times with wangxian" works used minimal tagging. Some people were annoyed with the proliferation of [blank] times with wangxian parodies, and one person posted a work on AO3 that was just a complaint about the trend: ANNOYING Times with Wangxian by orphan_account, Archived version.

Within a day of Bland Times with Wangxian being posted, AO3 users also noticed new works on the archive with huge numbers of tags. AO3 users on social media say they saw entire fics posted in the tags instead of the body of the work, or large sections of copyrighted works such as Harry Potter or 1984. Many of these were then reported and deleted. An anon at fail_fandomanon claimed to have had their account suspended for providing an invite code to someone so they could create one of the "wall of tags" works. Fans on fail_fandomanon and elsewhere also discussed whether these new works were annoying trolls or activism that would force AO3 to change their stance on tag limits or get them to code fixes faster. Annoyed OTW volunteers on tumblr noted that the so-called activism was taking up time they could have been spending on fixing the original problem, which they were already working on.[29] Other fans predicted that anti-shippers would start using these tactics to spam the tags of ships they didn't like.

Sexy times with Wangxian not being against AO3 site policy led to fan discussions about AO3 tag policy and whether it should be changed to limit the number of tags allowed on a single work. Some fans suggested changing the default site skin to limit the number of tags that display on search listings without limiting the tags themselves. Although this fic was the most egregious example, fans have long complained about overtagging, especially on short story collections posted as single works.

The OTW posted An update on blocking and muting features on April 1 and generated more claims that "wall of tags" works were the inspiration.

When virtual1979's AO3 account suspension was lifted, they reported that AO3 had a new limit of 75 tags per work:

Due to AO3's upcoming policy to limit the number of user-defined tags to no more than 75 in total, the full list of Fandoms, Relationships, Characters and any other former and newer Additional Tags associated with the content of the fic will be made available in the author's DW blog.[30]

A ticket to limit tags was opened on AO3's public bug tracker on March 31,[31] but the policy change was not officially announced until August 24, 2021:

In the coming days, we'll be rolling out a code change that limits the total number of fandom, character, relationship, and additional tags that can be added to a work. This limit of 75 tags will apply to both new and existing works, but no tags will be automatically removed from existing works.[32]

The admin post noted that less than 0.5% of works had more than 75 tags, existing works would be unaffected unless updated after the code change, and that having too many tags was not a terms of service violation. Some commenters on the post referenced STWWX, while others expressed their hope that the change would bring an end to multifandom drabble collections and other "wall of tags" oneshot compilations posted as a single work.[32]

The fic was deleted from AO3 on May 31, 2021. The reason is unknown. Twitter user dudski said that the author must have deleted the fic after it was hidden again by the Abuse team because shortly before the work was deleted, she got the same "You don't have permission to access" message that clicking on the fic generated post-suspension in February.[33] What the TOS violation was is unknown. The author tweeted about deleting the fic around the same time:

It's been awesomely peaceful and conducive for writing after I've disassociated from AO3 and ditched the sinking ship filled with trolls and troublemakers.[34]

Did another piece from the author's desk. My speech to those who tried so hard to take me and the fic down, but too bad, you suck and you lose 😈 At the end of the day, I'm doing fine and dandy, and you're not.[35]

As of October 2021, the fic is presumably still up on the author's dreamwidth account, but it is friendslocked and no one currently has been granted access.[36]