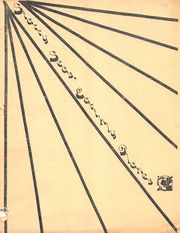 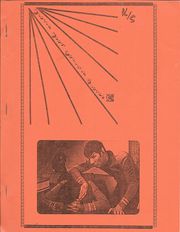 another version of the front cover (a bootleg?)

Starry Seas, Earthly Planes is a slash Star Trek: TOS 120-page anthology. It was edited by Diane Tessman. The pairing is Kirk/Spock.

The zine contains no interior art. 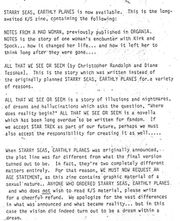 a flyer, printed in Time Out of Mind

except for "All That We See or Seem," printed in a flyer

An Ad for this Zine

The K/S relationship is an integral, functioning, vital component of this adventure which is set in the Fertile Crescent Earth at the dawn of humankind's leap toward civilization. Just who are the "gods from the skies?" And what of the "demon gods!" Could that be Klingons attempting to manipulate Earth into the Klingon fold at this pivotal point in her history? Whether using "sorcery" (psychotronic warfare with devastating effects) or hand-to-hand combat, the Klingons will stop at nothing! The editor wishes fen to know finishing touches have been delayed on this zine due to writing for a living (she is managing editor of 2 parapsychology magazines). She asks all those who have ordered to be patient. [1]

A Change in Plans

Originally, SSEP was advertised as being one thing; but in the course of re-writes, turned out to be quite another indeed! (And personally, we're much happier with the final version than what was originally written.) ... The final version of SSEP is K/S in nature, and an age statement is now required. If you pre-ordered, and DO NOT wish to read explicit K/S, SASE to the editor for refund information. [2]

Regarding "All That We See or Seem"

Regarding two similar stories: "For those who have read ALL THAT WE SEE OR SEEM (originally published in STARRY SEAS, EARTHLY PLANES, and who might think the plot of DREAMS OF THE SLEEPERS similar, the editor would like to point out that Christopher Randolph and Alexis Fegan Black are "one" -- quite literally. DREAMS OF THE SLEEPERS is the expanded novel drawn from an idea originally explored in ALL THAT WE SEE OR SEEM. The writing, scenes and plot, however, are completely new and different."

First of all, welcome to STARRY SKIES, EARTHLY PLANES. We thank all of you who have been patient...

Unfortunately, because of professional writing commitments, my time hasn't been altogether my own over these last few months, but I'm very pleased with how SS,EP has turned out now that all is said and done.

In addition to apologies, we would also like to offer an explanation. Originally, when STARRY SEAS, EARTHLY PLANES was proposed and in the writing stages, the zine was advertised as being an adventure taking place on Earth during the ascent of Man in the cradle of civilization. Unfortunately, as some of you already know, upon trying to complete the final re-write, a massive plot flaw was discovered which would have required a miracle of the gods to correct. So, rather than delay the zine any further, the decision was made to proceed with an alternate novella -- entitled ALL THAT WE SEE OR SEEM by myself and Christopher Randolph.

As to the fate of the original STARRY SKIES, EARTHLY PLANES, I hope to be able to complete the re-writes at some future date; though because of other commitments, I am not currently seeking SASEs for the zine (should it ever become one.)

Yes, Alled Navesih and I now live next door -- and I do thank her for her editorial assistance in getting STARRY SKIES, EARTHLY PLANCES together at long last.

See reactions and reviews for All That We See or Seem.

[zine]: This zine consists of four poems, a short story, and a novella. The poetry is unremarkable—with one shining exception: "Fallen Eagle", by Robin Hood, in Robin's inimitable style, is worth all the rest of the zine. The short story, "Notes From a Mad Woman", by Diane Tessman, is reprinted from ORGANIA 1—an offbeat, interesting story. The novella by Christopher Randolph and Diane Tessman—"All That We See Or Seem"- has a potentially fascinating storyline, which seems to take our heroes through a couple of alternate timelines. I say "seems" because it becomes vague in places, as though there is a transition phrase missing here and there. It would have benefitted from a little (or a lot of) editing; it is somewhat obscure in places, and one gets the feeling that it was thrown together in a hurry. A shame to waste an excellent story idea like that. A minimum of proofreading would also have improved the final product. Or a typist who could spell. After waiting nearly two years for this...production, I guess I expected a little more quality from a self-professed "Pro" writer. The emphasis on the copyright statement is somewhat amusing, all things considered. Not to worry, Ms. Tessman no one is likely to copy it. It isn't worth it. [3]

[zine, with a focus on one story]: This is basically a long novella [in this zine], published nearly alone, with one other quite good short story and a couple of poems. This one has several really fascinating premises, but it also has severe structural problems. It reads like a cobbled-together version of several incompatible drafts of one story. Plot twists untwist themselves, storylines are added and dropped at seeming random, lots of dropped stitches and horrible editing. The word Vulcan is misspelled as Vuclan about 3/4 of the time, and that is far from the worst. In the preface the author says that this was the replacement for a long in-the-works story that developed fatal plot problems -- well, this one is pretty bad too.

And it's a shame, because there's a lot of really good ideas in here. One thread is about a mission in time travel that went wrong and resulted in K & S being prisoners at Area 51, put into cold storage cryosuspension, and how they had to link minds to survive with sanity intact, because while the body sleeps the mind does not. Lots of angst, wonderful h/c, great astral loving sequences -- this thread alone would have made a wonderful story!

Or the initial thread, which has Kirk, Spock and McCoy dealing with the aftermath of their captivity among an empathic race who stuck all three men in a tiger cage together and basically got off on their dreams. They were forced into unwilling mental intimacy and it has made things very difficult for them since their release. This too would have made a damn good story.

But then there is yet another thread woven in where the ship is somehow thrown back in time to ancient Vulcan, and Spock goes nuts and runs off into the desert, something about an induced pon farr because of his guilt -- seems he hid Kirk's memories of their loving while in cryo-storage, and now he can't deal with that and is coming unglued --and this is the part that is forced, rushed, inconsistent and not at all credible. Yes there are a couple of decent sex scenes. But IMHO this entire thread should have been chopped out or at least seriously pruned back.

By trying to jam so much in, and because they did not catch the inconsistencies and just plain screw-ups, in fact they don't seem to have edited this at all, the authors took what could have been several really nifty stories and produced a damn near unreadable mishmosh.

What a waste. Save your money. It's worth reading once, if you can do so for free. But to purchase -- no. A pity. But there you go, even good authors drop a clanger once in a while. At least I got it cheap. [4]

Regarding "Starry Seas, Earthly Planes", yes it is available from me. I think it's on my web site. If not, people can contact me at my e-mail address for details if anyone's interested. I don't really advertise it for several reasons: 1-It's VERY old! You were right on in your observation, Jenna, that the main story, "All That We See or Seem" IS very close to the "Dreams of the Sleepers" trilogy. In fact, it was a precursor. I was witness to the genesis, if you will!, of both "Starry Seas" and "Dreams of the Sleepers" and the idea just became clearer and more flushed out -- and was presented MUCH better -- in DOTS. 3-The master for "Starry Seas" is an absolute MESS (as Greywolf had no problem pointing out)! This is because it was produced in ancient times before computers were commonplace. It was TYPED on a non-correcting typewriter (remember those?) and the physical master has been passed from hand to hand from the original editor (Diane Tessman) to Pon Farr Press to MKASHEF Enterprises and has seen great wear and tear -- literally! [5]