Reunion is a gen Dark Shadows novel by Dale Clark. It's the first in a series of seven books.

From the publisher: "A recurring nightmare -- a psychic link to the past -- causes Carolyn Stoddard Hawkes to make a series of startling discoveries about herself, her psychic mother, and the sister she never knew she had. With Julia Hoffman accompanying her, Carolyn embarks on a journey back to the year 1799 to avert the horrible death that awaits Victoria Winters at the hands of an unknown assailant. And in the present, Barnabas and the rest of the family fear that Laura Collins may be returning once again to claim her soul -- or worse, that David might be transforming into a supernatural phoenix himself. It is a time of discoveries...of choices ... and reunions. 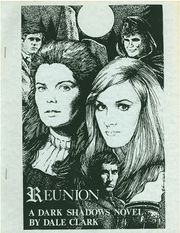 Also see: Interludes for a zine of related stories.

In the zine's forward, the author thanks the cover artist "Warren Oddsson, for providing such a beautiful and intriguing cover illustration. I've been an admirer of his talent for years and feel very fortunate to have his work grace REUNION."

Dale Clark, longtime publisher of the Inside the Old House fanzine, nonetheless centered his Reunion series of novels on Victoria Winters, and in doing so maintained a vital and authentic link to the TV show. Rather than seeing the character of the frightened ingénue as anachronism, Clark used the normalcy of Vicki Winters to mediate the spooky goings-on at Collinwood. Clark wisely perceived that a “normal” character in the foreground accentuates the oddness of the Collins family. His series of novels -- though intricately plotted to connect, each nicely stands alone – trade on one word titles, beginning with the letters “R” or “D”: Reunion, Retribution, Revelations, Destiny, Disaster, and Damnation [1]

I just received and read your work, REUNION. I would like to tell you that I thorougbly enjoyed it. Your continuity of not only events but also characters was excellent. I particularly liked your explanation of Victoria Winters' fate in 1795 since I have always felt it deserved one. I look forward to RETRIBUTION. [2]

Bravo! I cannot begin to tell you how much I enjoyed REUNION. I have recommended it to several people. It's so very well written and you stayed so true to all the characters, not only in their dialogue but describing their mannerisms as well. The plot was intriguing and it flowed very nicely. I can't wait for RETRIBUTION. [3]

I finished REUNION in three afternoon and late night readings. It was wonderful. You have a special gift for bringing our favorite characters to life. I especially enjoyed Victoria's storyline. You cleared up so many of those nagging loose ends. [4]

Thank you so much for your book REUNION. It came today - I just read it and loved it immensely! I could "see" all the characters in my mind as I was reading - it was like a new episode coming alive before me - like a video never seen before. You did a great job with our favorite characters, very lovingly done. [5]

The novels (REUNION & RETRIBUTION) were great. You did a beautiful job of picking up where DARK SHADOWS originally left off. I really felt as if I were back there (a 1971 flashback sequence?) watching all my old favorites act and speak and plot. Can't wait for more! -- but I guess I'll have to. I certainly appreciated the Eurythmics' song references -- hope you do it again in the next one or two. By the way, what did you think of Annie Lennox's "Love Song for a Vampire?" from Bram Stoker's Dracula movie. [6]

What can I say about it (REUNION) that hasn't already been said? Yes, it seemed like I was watching an episode of DS. Even more so for me, maybe because I read a bit of it each morning, in the 20 minutes of "free" time I have before I leave for work. So I sort of gave myself my half-hour episode each day (and of course couldn't wait to get home to continue reading!). [7]

I read your novel REUNION this past Sunday. I read it in one sitting because once I started I didn't want to stop. Your moments of characterization are just lovely. Not too forced or hokey, but warm and genuine. My only complaint is that I missed the inclusion of fan art. I found myself wishing there was a piece of illustration to go along with a particular scene. You write so well that I found myself imagining certain scenes quite vividly, and there were many that cried out for a good fan artist to provide an image. [8]

I received my copies of REUNION and RETRIBUTION this week. I finished them within 48 hours. All I can say is - I am sorry I waited so long to obtain them. Congratulations on a job well done. I especially liked how true you were to the characters. It was a logical extension from how they acted on the series (Sometimes I don't recognize the DS family in other fan fiction!). I was delighted with the prominent role you gave to Carolyn. She is ignored far too often in fan fiction and is usually portrayed as either a spoiled brat or a slut. Thank you for letting her grow up. You also do a dynamite Julia Hoffman. Julia has always been my favorite character and thank you for your dignified portrayal of this important TV icon. You also did a lot with Quentin, a character who seems to defy strong characterization from fan writers. He was just as dashing, sardonic and sly as he was on the series. [9]

I want to tell you how much I enjoyed reading REUNION and RETRIBUTION. Both are well-plotted and well-written, but what I like best about them is that they spotlight characters such as Carolyn, Elizabeth and Victoria that tend to be overshadowed by the ever-popular Barnabas, Julia, Angelique, etc. While there's no denying the attraction of these individuals, there were many other fascinating characters on the show, not to mention the tantalizing subplots that were never fully explored. One of the plot situations in REUNION does puzzle me a bit. Early in the book it is mentioned that the return of Vicki and Peter Bradford to Collinsport would be problematic due to the fact (among other things) that he "is a wanted man". Why? I seem to remember, late in the 1968 storyline, that when Barnabas returned to 1795/6 to rescue Vicki from hanging, he also rescued Peter as well. Barnabas put Nathan Forbes under his pwoer and forced Nathan to drop the murder charges against Peter. Therefore, Peter was a free man and would have the right to come back to his hometown if he so chose. Of course, Vicki's appearance would be difficult to explain! ((Whoops!! That was a on my part -- one that I plan to correct in future printings of REUNION. Dale)) [10]