Retrograde is a Stargate Atlantis/Stargate SG1 crossover series written by Ltlj (writing as Martha Wilson and Victoria Custer). It is set in the Retrograde-verse, an alternate universe where the Atlantis expedition has made no contact with Earth for three years. When SG-1 goes to find them, they arrive just a little too late.

The later stories in the series deal with the fall-out of the attack, the slow building of trust between the Atlantis expedition and SG-1, and the consequences of re-establishing contact with the SGC.

The series is very popular and widely recced. In 2007 it was voted "Best Crossover Story" in the Stargate Fan Awards.

In 2007, Sian published a zine that contained all stories as well as various illustrations: Stories from the Retrograde Universe. 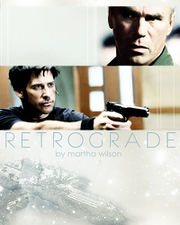