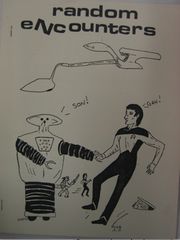 Random Encounters 1 was published in 1990 and contains 46 pages. The front cover is by Lyria Hall and Lynn Tucker, the back cover by Lynn Tucker and other art by Lana G. Merkel.

The artwork probably would have been better had it been nonexistent (barring three very nice portraits in the interior) and we don't even want to talk about the front and back cover or the quality of reproduction of same; the poetry ran from abysmal (1) through mediocre (2) through competent (2), to excellent (1); the stories were beginning efforts with some heart but failed execution...one was quite good and saved by brevity, I think; the production values were nonexistent and I don't think these people had ever heard of a non-reproducible blue pencil. But I enjoyed the hell out of that fanzine for all its flaws because it was evident that these people really put their hearts and souls into the work. It lacked polish, and, dare I say it, rudimentary knowledge in quite a few areas, but it was a nice attempt for the barest cost of printing--60 pages for $4.50 1st class. I would have given it a two on the tree scale, because they really made an effort and they were as unpretentious as they come. In reading the other reviews in Wanna Buy a Fanzine, I daresay anyone else in the zine would have given it a minus three. [1] 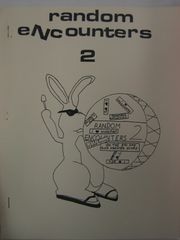 Random Encounters 2 was published in 1991 and contains 41 pages. Lynn Tucker is the front cover artist, other art by Lana G. Merkel and Lyria Hall.

Random Encounters 3 was published in 1992 and contains 43 pages. The art is by Lana G. Merkel and Mary Wheeler. 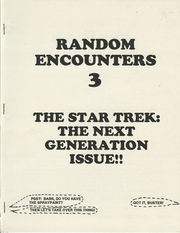 From an ad in The Monthly: "This time out, the fiction is all TNG. We have a vignette taking place after 'The Offspring,' an alternate universe family story dealing with Picard's relationship to Beverly and Wesley, and a P/C short-short (too short for sex, I'm afraid). The poetry represents a wide range of fandoms from Pern to The Terminator."

The poetry is Twin Peaks, The Hunt for Red October, Dark Shadows, Dragonriders of Pern, The Terminator, and Total Recall.