Rainbow Chasers is a slash AU Professionals novel written by HG and edited by Elaine W. 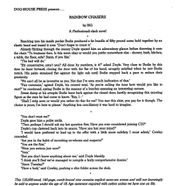 It was a paper circuit story originally written in 1988. It was later released in fanzine format by various publishers.

It's an AU how-they-met story in which Doyle never joined CI5, but Bodie did.

The Hatstand's summary: "An alternate universe Bodie/Doyle novel in which Bodie is an agent in CI5 and Doyle is a high-class whore who has turned businessman."

This fic was written in 1988 and circulated on the paper circuit.

The story was published as a 250-page zine by Tanglewebb Press in 1990. From a flyer:

The classic zine-novel by H.G., long, lush and lovely. Beautifully illustrated, and a great read. This is a B/D novel that stays with you, and one you'll re-read often. A/U with a difference, from one of the 'founder members' of this fandom. The premise is way out in left field ... it's what this gifted writer makes of it which makes it so memorable! Bodie works for CI-5 but Doyle doesn't ... in fact, he's been a hooker for a top-notch agency since he was a kid, and his association with influential folks leads to his working with CI5 and "falling in" with Bodie, in more ways than one. It may sound wild and woolly, but what H.G. does with this is not to be missed! It's around 220pp, illustrated [sic]. A$30 + postage. It's a heavy zine folks, outside the normal 500g bracket. [1]

This issue had full pages of artwork. The artist is uncredited; all but one the pieces are signed "ZEB 1990." The back cover may have been created by a different artist.

All artwork was "for sale," and fans were instructed to contact Tanglewebb Press.

From the zine: "RAINBOW CHASERS was originally written in the Spring of 1988 and has been on the circuit since then. This version has been re-formatted with the aim of making a legible copy more available."

An interesting AU that portrays a very different past for both of the guys, yet still brings them to almost the same final destination. And there's plenty of angst and misunderstanding along the way, of course. [2]

A novel from HG and the defunct Tangeledwebb Press. It's yet another AU how-they-met story. Doyle never joined CI5, but Bodie did. Each of them brings interesting baggage to the relationship. [3]

Were the zines [fan refers to Book of Strife, as well as "Rainbow Chasers"] worth all this effort? Definitely, despite the lack of proof-reading which meant that there were some very strange words in the text. The zines are nicely bond, the type face is clear and not micro-print. Rainbow Chasers was a beautifully written, alternate universe story that was most difficult to put down. Ray Doyle was justifiably arrogant and independent, and his encounters with the devious George Cowley were pure delight. All the characters were three-dimensional. The humour, at times subtle, was there as it is in the best of the TV episodes. I have no hesitation in recommending this'story to everyone. [4]

Ah, one of my favorite PROS novel and the *only* story involving "Doyle as a prostitute" that didn't make me retch. (High praise, huh?) I actually wanted to type that one up almost more than JIGSAW PUZZLE when I was entering it for the Pros on-line library (hey, [D], when are you sending me more stuff to type?), but it had just gotten published by Jane of Australia. There's no editing or even typesetting difference that I can tell between it and the original circuit novel and it cost me $33 *in person* at a con and while I am a sap and am willing to pay that much, I would be more inclined to recommend that people keep looking in the circuit story boxes at cons if they have the patience... [5]

In 1998 readers discussing their love of the story (and the need for a more legible copy) on the CI5 List. One fan wrote:"I'm with all those who love and reread Rainbow Chasers. At one time I called it my favorite Pros zine. That's since changed, but I went so far as to buy a second copy of the zine from someone who read her zines carefully. My first copy, bought 2nd hand at my first MediaWest for the largest price I had ever paid for a zine, new or used, was very battered. I will most likely buy a copy of the reprint, however, because the original zine has more typos, really bad typos, than I have seen in any other zine. Bless you, [J], for cleaning up the text. [6]

... you gorta have a Doyle-as-a-tart story and I don't know a better I have to have this one, if for nothing else than the image of a naked, golden Doyle stretched on a blue velvet bed. Add to that the fad that said Doyle then leans on his elbow and starts arguing football with Bodie, and it's irresistible. (He just would wouldn't he?) Plus, I really relish the way this Doyle gets the better of Cowley (yes!) while Bodie stands back and grins with fond pride. [7]

This is a Pros AU, with Ray as a rent boy who makes good. In his misspent youth he meets and falls in love with young Bodie but circumstances conspire to tear them apart; a decade later they meet again when Ray is inadvertantly caught in a CI5 raid led by Bodie. A not insignificant portion of the zine is devoted to young Ray and to his life and occupation as he grows; I minded this less than I expected, and I even liked the image of Ray Doyle, financial whiz-kid (or Zurich gnome, depending on your POV *g*).

I find HG to be a nice writer - she has some mannerisms that bug me, like a tendency to dangle her participles and an unfortunate penchant for using (though only rarely, thank god) purple phrases like "male animal" and "sweet man flesh" that make me cringe, but I like her style generally. She writes good relationship-driven fic. I find her Bodie/Doyle banter sharp and spot-on and never sappy. In fact, she does a great job of writing the guys as guys - they never start making lengthy proclamations of love and talking deeply about their feelings, yet you can always see the depth of their feelings beneath the surface, and they say enough to each other, and in the right ways, to satisfy me. I also like her smut quite a bit, and she has plenty of it, though she occasionally fades to black when I wish she wouldn't. Then again, I understand that in a long novel-length relationship-focused novel like this, writing out every sex scene is unnecessary and might start to feel repetitive; they're not all of equal importance in terms of telling us more about the relationship or the characters. (Although unnecessary doesn't mean unwelcome!)

(It was a source of great sadness to me that the zine I was reading was missing a page, front and back, that included some of the key smut and togetherness passages and acknowledgment of feelings (or at least I think they did) ... now of course I'm chafing at the bit to get my hands on those. Anyone have a copy and willing to scan two pages for me? *g*)

Yet though I liked Rainbow Chasers very much, it didn't move me tremendously, and I'm not certain why. I think part of it is that HG's style and her use of omniscient POV (common I find in many older zines - is the obsession with limited POV in slash a recent one?) causes it to feel slightly remote and distanced to me, not so sensual and immediate. (I have a similar reaction, though on a different scale and in a different context, to Tolkein's writing (also omniscient), which has always left me entirely unmoved - the story he's telling might be moving in the abstract, but the way it's written isn't, too me; I feel very little while I read.) There's something a bit ... distanced, maybe, about it, which keeps me from really feeling the story. I'm not quite sure how to explain it, and it's not like I didn't have any emotional reaction to it - just not an intense one.

I also got a bit tired of Ray's stroppiness, which I thought was excessive at times, particularly toward Bodie. In particular his reaction when he makes a key discovery about Bodie midway through the story struck me as way over the top, as did Bodie's response. But in the end, though she skirts the line at times, the author just manages to avoid that (for me) fatal error of contriving one stupid and gratuitous misunderstanding after another until you want to throw the zine at them and scream grow up! She never quite crosses that line; at times I was a bit frustrated with Ray's behavior in particular, but it was never excessive enough or lasted long enough to put me off, and there was plenty of real relationship and togetherness, not just endless miscommunication.

(As an aside: thinking about that got me pondering how to write a long relationship-driven fic, and the role of angst/misunderstandings/miscommunications in that kind of fic, but I decided to save those musings for another post!).

So overall, if not among my favorites of all time, this was another solid, thoroughly enjoyable story, with many great points and a great satisfying ending, one that I'd definitely re-read (in fact, I have!). [8]

The story is long, well-paced, with an excellent combination of action, intrigue and angst, not to mention the hot, steamy slash and some humour for good measure. I particularly enjoy the dialogue she writes between Doyle and Cowley, although the interchanges between Bodie and Doyle are also extremely well done. She manages to make the simplest action speak so clearly, and her writing style is fluid, unobtrusive and polished. [9]

Why this must be read: For the image of Doyle, unable to see, splayed over silk and velvet sheets in front of a stunned Bodie. Oh wait. I mean, for the plot. Yes. Another long story for the weekend, and it's very long, so I'm posting early (also, I am away then...) This is another of HG's novel-length Pros AUs. It's not quite as AU as the historical half of her Re-Discovered in a Graveyard, though - all of this one takes place in Pros-era London, for a start. The big AU element is that while Cowley runs CI5 and Bodie works for him, Doyle has followed entirely another career path and is manager of a London agency which provides everything from plumbers to escorts. He worked his way up, and he didn't start as a plumber. And then his path crosses that of Bodie. But neither of them know. For what seem entirely reasonable reasons while you're reading it, Doyle can't see for the duration of their night together - a night which moves from trepidation to delight - and their paths separate immediately after. Inevitably they meet again, but it does not go well. This sets the pattern for this story: the attraction is there, but misunderstandings abound. [10]