From Fanlore
(Redirected from Queer as 2 3-Pound Notes)
Jump to: navigation, search

The £3 Note Series is a set of three Professionals slash anthologies, with most of the stories written by M. Fae Glasgow. 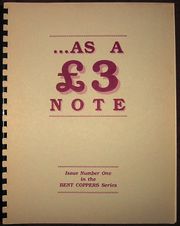 ...As a £3 Note was published February 1991 and has 138 pages. It contains eleven stories by M. Fae Glasgow (some written under various pseuds). On the cover, "Issue Number One in the Bent Coppers Series."

See reactions and reviews for A Summer's Outing, and Devices and Desires.

See reactions and reviews for In Flagrante Delicto.

[Silence = Death]: A wrenching tale of AIDS and its ravages. Some may not want to read it, but I do.[2]

All the stories in the zine are by the Glasvegian/M. Fae Glasgow, a tireless and prolific writer whom I have never met, though being an Edinbugger I ought to have... If you've read M. Fae Glasgow's work elsewhere (she always uses fairly obvious Scots pseudonyms) you'll know this is a guarantee for good writing. Buy it, it's 156 pages of sodding good work, how can you lose?

For those who haven't, let me tempt you. Eleven stories, divided up roughly into eight categories: Bent Coppers, Thrupp'ny Bit, Brass Farthing, Silver Thruppence, A Shilling Shocker, Two Coppers to Rub Together, Guinea to a Gooseberry, and Gold for the Ferryman. (Somebody likes puns.)

'A Summer's Outing' and its sequel, 'Devices And Desires', takes a standard plot outline (Cowley tells Bodie and Doyle they've got to come out as lovers, and their reactions to this and each other) and remorselessly shakes and stirs it to produce - something chillingly realistic. All I'm going to say about the sequel is that it broke my heart. How could they do that to him?!

'Panoramic View' and 'Murphy's Law' are two fairly graphic S/M stories, with some neat character insights for gravy. Real consensual S/M, very hot and sticky; both have Bodie as the "'bottom man'. Yum.

Then there are a couple that are pure cuddles. 'An Abarent Abearation', is, well, yet another teddy story. A nice, cuddly, teddy story. Honest. (giggle) 'I Saw Three Ships' is a Christmas story. You remember what Christmas is really like? The relations you can't stand and having to be polite to them for twenty-four to forty-eight hours... and you remember what Christmas used to be like when you were young enough to think it magic... and what it would be lovely if Christmas were like, being with the person you love best, warm and safe and cuddly, with fairy lights and all. Ahhh.

'In Flagrante Delicto'; you like to feminise Doyle, or read stories in which he's been feminised? Heh, heh, heh.

'Own Goal' and 'Footbridge' are two almost public-sex stories, with good Scots accents and some truly appalling puns on the side.

I think my favourite of the two is 'Footbridge' because it has Cowley in it... and I still wonder who brought the shoe back.

[zine]: While I agree that much of the writing is good (though in places I felt as though I was being swamped by words), I would have enjoyed some of the stories more if I hadn't felt manipulated as a reader. The writer seemed to be writing to make a particular point, rather than out of any love for the characters. And that irritates me. I could also have done without the puffery at the beginning of the zine and all the explanations preceding the stories. I like to be warned if there's a death story, but otherwise a story should speak for itself, otherwise there's something wrong with the writing. That said, I continue to re-read the story 'Devices And Desires - I don't believe the setting but I love the fact that it deals with Bodie and Doyle as more or less middle-aged men.[4]

M. Fae Glasgow in all her guises is what I call a gritty writer. Her work is good if sometimes uncomfortable to read. She also has the knack of making the reader think. Quite a lot of her work has the feeling of realism about it. All these comments are applicable to the stories in this zine.

There are two death stories in this zine. EXEUNT is a death and suicide story, and SILENCE = DEATH has Bodie dying of Aids. Both are gut-wrenching to read.

A SUMMER OUTING is also an uncomfortable read though not as difficult as the death stories. The story itself left me wanting to shake both Bodie and Doyle. The sequel, DEVICES AND DESIRES goes some way to righting their relationship. Or at least putting them on a level footing to go forward.

I SAW THREE SHIPS is a nice Christmas romance story. PANORAMIC VIEW investigates the subject of dominance and submission, as does MURPHY'S LAW.

I've only touched on the stories which have stuck in my mind, but there is plenty of good reading in this fanzine for everyone.[5] 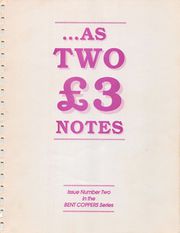 From "Media Monitor": "Stories range from dark and hard to sweetness and light with a special stop at consensual SM"

This issue contains the infamous "catheter story," "Blessed Are the Meek."

See reactions and reviews for November.

See reactions and reviews for Ambush.

See reactions and reviews for Flight of Fancy.

See reactions and reviews for Grievous Bodily Harm, a series of three stories, one which contains the "infamous catheter story."

[My Beautiful Launderette]: My favourite of this time of story.[7]

[zine]: 3-pound Note 2. I just re-read it this weekend, lying in front of the fan. That is a fine all-round zine, with 'heavy' stories by Shoshanna, Sebastian and Thomas and several amusing stories by M. Fae under her lighter pseudonyms. No rapes for Erzebet, but this is the zine with the infamous Foley catheter story; I managed everything up to this one, but the catheter story was too much for me. Everything else, including the stories leading to the catheter, worked for me, although I do have reservations about Bodie as a bottom in S&M; I don't really understand it, and that's what bothered me in the catheter story as well. Great zine, though [8] 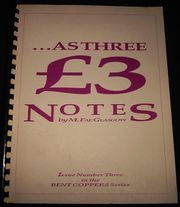 ...As Three £3 Notes was published May 1993. It has 127 pages and contains eight stories, one Bodie/Cowley, the rest Bodie/Doyle, all written by M. Fae Glasgow.

See reactions and reviews for Subject to Change.

See reactions and reviews for Step We Gaily.

[zine]: I'll have to go through and look at the stories I have again, but I can tell you off the top of my head what my least favorite story of [Glasgow's] is: Pick one from the last 3 Pound Note. I thought most of them were pretty surface for her and the humor was more...I'm not sure how to describe it. It seemed like she was getting bored with Pros or with doing the zines. I assume that wasn't the problem (I asked her about it at one point and she looked at me like I was nuts. Not a new experience for me, but...), but that's the feeling I got from it. There was just something very flip in the execution and very little that did anything for me.[9]

Well, it's a safe read. No catheters and no B/D engaged in B&D. No real rape either. The general tone is a bit down; there are no Teddy Tales and no romances from Gael X. Ile. There is a sports story on ferret-legging and a DIY on home permanents, but even these manage to carry out the general theme of the difficulties of love and relationships for men in 80s England.

The lead story 'Step We Gaily' is from Cowley's POV. He sees Bodie in a gay club, and much of the story is C reflecting on his life and restrictions as a gay man and what he should do about Bodie. Those who liked Jane Carnall's B/C stories (Sandy) might want to look at this.

The other long story, 'Rough Trade', has Bodie dealing with his self-image when he finds himself attracted to Doyle. The story ends without a satisfying resolution, and M.Fae plans no sequel.

"Room Service" and "Subject to Change" are more stories about acceptance of love; in one Doyle is the reluctant one, Bodie in the other.

"Beating Around the Bush" is apparently taken from real life, and is the most cheerful story in the zine.

The last story is a vignette and a weeper. It's not a death story, but it fits in with the rest of the set.

As always, M. Fae does a good job on the writing. Yes, there is character distortion, but not more than I am willing to accept. More than most, these stories need to be read one at a time, interspersed with other things.

They are worth reading, but don't take the zine to the beach. And keep a gushy romance handy as an antidote. I followed up with "IN HOT WATER" which worked well.[10]