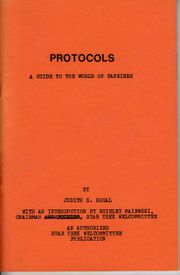 Protocols is a gen Star Trek: TOS 55-page booklet on etiquette for fanzine publishers, contributors & consumers. It was written by Judith Z. Segal of The Star Trek Welcommittee and has the subtitle: "A Guide to the World of Fanzines, Helpful Hints for Editors, Authors, Artists, and Readers." This zine has an introduction by Shirley Maiewski.

From a flyer in Stylus: "A must for anyone thinking of starting a fanzine. 'Protocols' contains lots of helpful information about editing, stories, articles, illos, copyrights, and generally getting one's zineact together. Also included is an introduction by Shirley Maiewski, of Star Trek Welcommittee fame."

From the Introduction and the Author's Preface

For some years the zines dealt only with Star Trek — trends came and went. Action-adventure; 'Mary Sue's': Romance for the Bridge Crew; Life and Death' Get-em's and more. However soon there were others, as people who enjoyed other series discovered how much fun it was to write their own stories and publish them — Starsky and Hutch, The Prisoner, Western — there seems to be no limit, especially now that zines such as Syndazine have appeared. PROTOCOLS is designed to fit the need of "communication" in the fanzine world. It deals with the way we should all treat one another in Zine fan-dom. It reaches each aspect of that Fandom, and while we are all doing this for fun, it is a serious business, and reading it from cover to cover (no matter what a particular person's interest is — from reader to publisher) all the points it covers are important. It gives insight into all problems, and makes us all realize how difficult it all can be. However — problems began to crop up...The rules, ethics and suggestions given here have been gleaned from conversations with editors, authors, artists and readers at Trek conventions, and through the mails, during the past three years. Through these conversations I came to realize that there was a distinct lack of communication between these groups of people. Many in each group were becoming annoyed with others, in and out of their group, because they were not doing "the right thing". But nowhere was there any kind of publication that would tell anyone just what was "the right thing" to do. Hopefully this booklet will fill that gap, and will prove to be a useable guide for everyone involved in the production of fanzines.

The author notes that some Star Trek authors have created their own "private universes, personally created 'alternate universes'; this zine knows of "twelve that are large enough or powerful enough to have attracted attention" and lists them as:

Protocols gives a nod to some other fandom's zine and lists seven by name, saying that "there are others, but the names and addresses are unknown to this author," something that illustrates how isolating, and isolated, fandoms could be from each other.

The author also notes that "[there are] others in existence, whose addresses and titles I do not know: The Prisoner, Starsky and Hutch, Battlestar Galactica, Star Wars (The producers of Star Wars are very touchy about zines. They DON'T encourage them. Be careful with a SW zine.)" It is interesting to note that she does not mention Doctor Who, a fandom that had, even at that time, a long history of zines.

PROTOCOLS is an authorized publication of the Star Trek Welcommittee. The purpose of the publication is to suggest an informal set of rules for fanzine editors, writers, artists, and consumers to use when conducting the business of fanzines. PROTOCOLS starts at the bottom by defining fanzines and then goes on to investigate the roles of all parties concerned with the emphasis on the problems which can develop when editors, writers, artists, and readers interface with each other. Ms Segal offers many suggestions based on plain common sense which, if followed, could eliminate most of the interface problems. She then goes on to give a brief discussion of the fan and copyright law, and says a few words about getting the reader's own fanzine off the ground. She also includes a brief list of major universes and/or fanzines, both Trek and unTrek. Ms Segal is one of the better technical writers around. She has a well-organized mind and develops each topic in a logical and orderly progression. Her style of writing is deceptively simple, and even people who hate reading non-fiction can zip through this little pamphlet and come out refreshed and educated. It is highly recommended for someone new to fanzines and and/or the neophyte writer/artist/editor. [1]