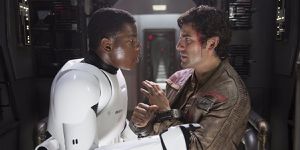 Finn, wearing his Stormtrooper uniform with the helmet removed, talks to a bleeding and handcuffed Poe Dameron.

Poe Dameron/Finn is a non-canon relationship in Star Wars: The Force Awakens. They don't interact for much of the movie, mostly because Poe is assumed dead for most of the movie, but they connect quickly.

Their instant connection is supported in the novelization of The Force Awakens:

Was he being set up? Poe wondered. No longer needed, was he being made the subject of some cruel psychological trial, only to be thrown away at the conclusion? Yet there was something about the trooper that made Poe feel he could trust him. His manner, his look: There was something that said “throw in your lot with this one and you won’t be sorry that you did.”
— Alan Dean Foster's Star Wars: The Force Awakens

Following the release of the film, Stormpilot was initially the most popular ship, according to numbers of fanworks posted to AO3. However, Kylux eclipsed Stormpilot within a few months, leading to accusations of racism in TFA fandom. Issues of racism within Stormpilot fanworks were also discussed. See Star Wars: The Force Awakens#Racism In and Outside The Fandom.

This pairing maintained its position as the second most popular ship in the fandom for the remainder of 2016, and almost all of 2017. [1]Prior to the Last Jedi, many fans were looking forward to interactions between Finn and Poe, and some were hopeful that they would become canon. However with the release of The Last Jedi, other ships like Reylo began to rise in prominence. While Finn and Poe shared a subplot in the film, their interactions were limited. Finn spent much more of his screentime with a newly introduced female character Rose Tico, who developed a crush on him and kissed him at the end of the movie after saving his life.

As of 20 January 2019, there are 5366 fanworks in the Poe/Finn AO3 tag. It is the third-most popular ship in the fandom by the numbers, following Kylux and Reylo.

In December 2019, leading up to the release of The Rise of Skywalker, some controversy arose when John Boyega and Oscar Isaac began discussing Finnpoe, both indicating that they thought the characters had strong chemistry and they would have been willing to explore a romantic connection between the two. Other TPTB, such as JJ Abrams, also indicated that they were aware of the popularity of Finnpoe and would have supported the relationship being canon, and that LGBT representation was important to them. Fans reacted unhappily to to confirmation that Finnpoe would never be canon. Some thought that it was disingenuous for creators to keep saying that they cared about LGBT representation and respected the desire to see it in Star Wars canon, but never deliver. There were some accusations of queerbaiting, though others argued that the promise of representation had never been made and acknowledging the ship did not automatically make it bait.

Origin of the name Stormpilot

The earliest mention of the name Stormpilot comes from a Tumblr post by user palizinhas [1] on the twelfth of November, 2015, stating:

I need to think of an actual ship name to call these two. Foe is awful. So is Pinn. Fimeron is… Strange. Damerinn is, well.

Honestly the best I could come up with is StormPilot. So I’ll use that until the fandom comes up with a better one.

The name caught on and began to be used by fans on various social media including Twitter and Tumblr.