As of May 2012, the archive hosts 435 stories in over thirty pairing categories and 16 articles. The site is currently hosted by Shannon at Magical-Worlds and is powered by eFiction.

Pink Frilly Robes was created on February 2, 2004 by Kaz, "with the prompting and encouragement of Ginnysdarkside and Gianfar."[1] The name was coined by Ginnysdarkside and is a reference to the description of Pansy's robes at the Yule Ball in Goblet of Fire.

The site was initially hosted by Kaz at her website, Near Her Always[2]. In 2005, it was updated to automated eFiction software so that authors could directly upload their stories, and it moved to Magical-Worlds (magical-worlds.us), where it was hosted and run by Shannon.[3] In 2006, ownership was transferred to Ava,[4] who currently runs the archive.

Sometime between February 2008 and May 2011, the site was redesigned and lost several features, including the beta reader listing, icons page, challenges, and customizable skins.

Layouts for the archive have featured various actresses, such as Samantha Mathis and Thora Birch, representing an aged-up Pansy. One skin featured Draco/Pansy fan art by LinkTerra. The current layout has no graphics and no available skins. 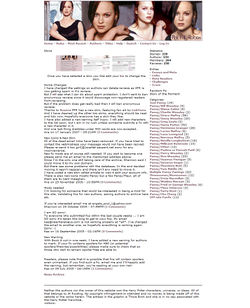 As a Pansy-centric archive, Pink Frilly Robes accepts only stories that feature Pansy Parkison as a main character. Though this is no longer stated explicitly in the submission rules, a past version of the rules stated:

"[Stories] must be about Pansy Parkinson. She can be paired with any character from the books (or from crossovers) or not be paired at all, but she must be the central character in the story."[5]

The current submission rules are brief and do not prohibit any specific themes or kinks. They state simply:

Past versions of the site were more specific regarding what was required for ratings and header information. For example, past rules state that "all fanfic must contain a header with the title, author, author email, rating, summary, disclaimer, and any other necessary info"[5] and to "rate your fic appropriately! If you're unsure, email the webmistress and ask for her opinion"[7] Though the FAQ states that the archive uses Fictionratings.com's ratings system, stories are in fact rated on the standard MPAA system (G through NC-17). Though stories with adult content are permitted, only registered users may read NC-17 stories and there are a wide variety of archive-defined warnings.

Until January, 2007, stories were required to be over 500 words, but this requirement was revoked and drabbles are now accepted.[8]

Pink Frilly Robes categorizes stories by pairing. As of May 2012, there are 33 categories; the most popular are:

The original (non-eFiction) version of the archive also allowed stories to be viewed by author and rating. The current version of the site allows you to search by pairings, characters, ratings, genres, warnings, and length (though genre labels no longer appear in story listings or headers).

Before the site's latest renovation, there were several "Extras" pages that included content such as a beta reader listing, a page for user-submitted challenges, and several dozen icons created by various users. The only remaining "Extras" is the Links page, which contains a comprehensive listing of Pansy-focused sites as well as other Harry Potter fansites, archives, and communities. Additionally, there are links to various writing resources (such as the Mary Sue Litmus Test) and various other resources (such as for British terminology, myths, and names).