Peers of the Realm 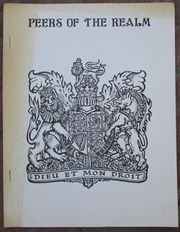 Peers of the Realm is a 56-page gen all-British media anthology published by Anglofans Unlimited. It contains stories, filks, art, and poems. 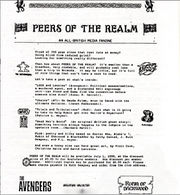 "A zine devoted to British Media, published by Anglofans Unlimited, will feature material based on Robin of Sherwood, Blake's 7, Doctor Who, and The Avengers, as well as an original British ghost story. Planned to be out in time for Herne's Con." [1]

Peers of the Realm is a slender book with an appealing cover—the British coat of arms on front and the Anglofans coat of arms on the back—at a price so low it might make you think twice about picking up a copy. But the editors have created a level of quality that's probably easier to achieve in a 'zine numbered at 56 pages.

Part of the pleasure is that it's an enjoyable read straight from cover to cover. A good cross-section of British media is represented, and every story if given a chance ought to please the fandom-specific reader—a considerable feat in a multimedia 'zine. The biggest problem is the typeface: the high-quality MacPrint has reproduced a little on the murky side, but it's well worth the minimal effort of the eyes.

The first story, Dead Man's Boots by Barbara Mater, is an atmospherically rich horror story. It's a bit abruptly resolved but has a thick, musty nineteenth-century feel. Choice by Janet Paderewski is a Post-Gauda Prime (after the last episode) B7 story with a psychological twist that brings in even the question of who fan writers choose to resurrect in their personal season openers.

Faithfulness in dialogue to characters' rhythms of speech is probably the thing in fanfic which must be most true to what we all know is "really" RoS—more important than description, television-style pacing, or even plot—and in Trials and Tribulations by Patrice Heyes, the author shows a steady hand. Will and Robert have a good solid talk, post-rime of the Wolf, a meeting of minds that comes to a resolution in a sometimes straightforward, sometimes multi-layered conversation. The result is a story that's patronising neither to the readers nor to the characters.

The filks—by Cathy Conrad, Mac, and J. Ruth Dempsey-cover RoS, Blake's 7, Doctor Who and Blackadder, ranging from rock to traditional ballads, and are mostly on the humorous side. Since I tend to find filks obscure when I don't know the tunes, I'll just say that they were readable and well-placed among the stories.

Interlude, another piece by Patti Heyes, is an introspective free verse consideration of Marian's, the Sheriffs, and Robert's thoughts after The Greatest Enemy, and is perhaps not as original or at the same level as her prose.

The nicest surprise of the collection was an Avengers story that read so much like an episode—a blend of action and quirky humour, characters sharply delineated, guest stars alive and interesting—you might have just turned on a new program to catch a look. I'm an Avengers fan through vague memories of being placed in front of the TV whenever it aired, so I was surprised that I found Susan M. Garrett's LADS and Lassies so comfortably in line with the spirit of what I remember. At twenty pages this is the longest and most successful story in a successful 'zine, and a good introduction to a clever program readers will probably want to see more of.

Nothing is ever perfect...but these stories entertain, for at least as long as a Kevin Costner movie, and for that alone they're worth the admission.

The art was well-distributed, though seemed a little sparse (six credited illustrations): a combination of griffin slugs, Mac clip art, and full-page line drawings by Vicci Cook, Christine Haire, and David Lawrence. All were nice and technically adequate, but none were as striking as the doctored photo-art accompanying LADS and Lassies.

Easy to miss at the end (it's in a different typeface, and might be taken for an ad or afterword), is a "Filmography" of Ian McShane, introducing a possibly unfamiliar actor with a brief biography. This did make me wish they had used the courier typeface (used here and for the contents and afterword) throughout. It looks like a plain old typewriter, but it's easier on the eyeballs.

That one complaint aside, I hope to see many, many more short, brilliant efforts from the Anglofans. [2]