Herne's Con was a fan-run Robin of Sherwood con. There were three.

A fan remembers: "... Son of Herne's Con in Ithaca, New York last June... it was the most enjoyable and interesting con I've been to in any fandom! All the people I met and got to talk with were extremely friendly and very knowledgeable on a huge range of subjects. I was sorry to go home at the end of the event." [1] 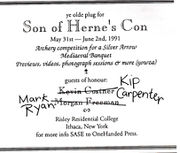 flyer for the second con, the crossed-off names a jab at the controversies over the current film

The subject of slash came up: "These characters were created by Kip and should remain within the bounds he created. True, he does not have ownership of the legendary characters, but as they are represented in RoS, yes he does. Generously, he has given his permission for us to play in his universe as long as we remain true to what he created (he told us this at Son of Herne's Con). Therefore, a writer must tread very carefully when attributing to a character abilities that were never manifested in the show." [2]

Some other statements regarding fanwork content is what is quoted in the first issue of Forbidden Forest. This issue has a dedication to Kip Carpenter, "who told us at Son of Herne's Con: 'If you're going to do a dirty 'zine, don't mess about...do it all the way!'"

Both cons were filmed and were available to fans for purchase. 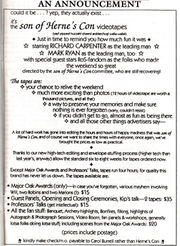 flyer for the second set of tapes