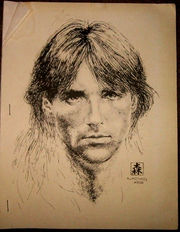 The Sacrificial King is a gen Robin of Sherwood 63-page anthology edited by Joy Harrison.

It is a "special presentation of The Sonic Screwdriver...a collection of invitation-only stories with a common theme."

The King is tied to the land; the health and well-being of the land are reflected in the health and well-being of the King. If the land -- and its people -- fall, if they grow weak and sick, that must be because the King is weak, and sick, and falling. And only the willing, knowing sacrifice of the King can restore the land and its people to health again. Robin of Loxley, Saxon peasant, Herne's son... Invited to the village of Brideswell for the Lammas celebrations, is he called by the Goddess to be Her King? Robert of Huntingdon, nobleman's son, the Hooded Man... Leaving his Maiden to take her vows as a Christian nun, has he broken faith with a religion far older than that of his childhood? Marion of Leaford, the Maiden of Sherwood... A Christian, raised in a faith that denies that of her love, can she even begin to comprehend the power and the demands of the Old Faith? These stories are an exploration of all these questions, and of the concept of the King who lives and dies for His land, His people and His faith.

You hold In your hands a very special publication. Instead of the regular Issue of THE SONIC SCREWDRIVER you probably expected from us, this year OSIRIS Publications Is proud to present THE SACRIFICIAL KING, a collection of Invitation-only stories with a common theme.

Two people, neither of them In any way associated with OSIRIS Publications, are to a large degree responsible for what you are about to read. To Richard "Kip" Carpenter, we owe the lovingly and carefully created story, tone, and mood of ROBIN OF SHERWOOD. And to Katherlne Kurtz, a professional writer of fantasy and science fiction, we owe a special debt for the inspiration of our theme. In a magnificently crafted novel called Lammas Night, she brought the Idea of the Divine Sacrifice to our attention, and made It live. Without the inspiration of these two, we freely confess we would never have undertaken this project. The stories that follow are all drawn from the ROBIN OF SHERWOOD universe — but the Sacrificial King belongs to no one science fiction/fantasy media universe, for It Is a concept more truly drawn from the history of our world. The King Is tied to the land; the health and well-being of the land are reflected in the health and well-being of the King. And If the land — and Its people — fail, If they grow weak and sick, that must be because the King Is weak, and sick, and falling. And only the willing, knowing sacrifice of the King (or his equally high-ranking substitute) can restore the land and Its people to health again. Jesus of Nazareth, "King of the Jews" and Son of God — God Incarnate... From other religions: Osiris, Tammuz, Mithras... From the history of England, where the concept has long been well-known: William Rufus, son of the Conqueror... Thomas Becket, Archbishop of Canterbury and close friend of King Henry II... And from British legend: King Arthur... Robin of Loxley, Robin Hood... The list can be drawn from the great figures of history, or from the figures of legend. And it can extend Into more modern times. What of John F. Kennedy? Might he not be the nearest thing to a "divine king" the United States has ever known? Wasn't he loved and adored by many? And might his death not have been a sacrifice for his "kingdom," for his people? Why did John Kennedy go to Dallas at a time when his popularity In the South was far from high? Why did Thomas Becket not resist the knights who slaughtered him before the altar of his own cathedral? Why did Jesus of Nazareth go so willingly to His crucifixion? Whether we as individuals believe In the Goddess and Her Consort, whether we believe In the Divine Marriage, whether we believe In the Sacrificial King Himself — It Is not Important for the purposes of this publication. It Is enough that the characters in the stories believe, and that they — and we ~ understand the meaning of the King and His death, both for themselves and for the world around them.

And so we offer you these stories, written by three women of distinctly different back grounds and beliefs, who do not know each other, but who do know and understand the concept of the Divine Sacrifice, each in her own way. Our stories reflect four different pointsof view ~ Robin of Loxley, Robert of Huntingdon, Edward of Wickham, and Marion of Sherwood. We welcome you to read them, and try to understand... Blessed be.

See comments regarding The August King.