Forbidden Forest is a gen and adult het Robin of Sherwood anthology.

Dear [S], I couldn't agree with you more concerning your comments of the tiny-minded homophobia that appears to run rampant in RoS fandom. It's hard to credit from a show that hands the fans ready-made admittedly GAY characters! It's enough to give one a stroke—and not the rock hard pulsating kind! FORBIDDEN FOREST is 98% straight, but they still will only print stories with gay relationships if the characters were explicitly presented as gay in the series. For a 'zine with the motto "Nothing is Ever Forbidden" they seem to forbid alot of things! [1]

Forbidden Forest 1 was published in 1991 and contains 192 pages.

From a 1993 ad: "Nothing is ever forbidden! Here at last is a zine for those NC-17 stories that no one else will take."

This issue has a dedication to Kip Carpenter, "who told us at Son of Herne's Con: 'If you're going to do a dirty 'zine, don't mess about...do it all the way!'" and includes the epigraph "Nothing's forbidden...nothing is ever forbidden'." [2]

from editorial: slash, permission and "integrity"

Forbidden Forest 2 was published in 1992 and contains 290 pages.

From a 1993 ad: "Journey through the forest if you dare but beware of [what] might lurk behind the tress and never trust a beguiling outlaw."

It contains two slash stories involving minor characters. The editorial had this disclaimer:

Next, there's story content. The purpose of 'Forbidden Forest' is to provide an outlet for those stories which, by nature of their content, really couldn't be published in other 'zines. This doesn't limit you to stories involving explicit sexual situations. Graphic violence, extreme physical situations or horror elements are also welcome options... This brings us to our last point -- slash ("/") stories. While we have absolutely nothing against homosexuals or gay relationships (as should be evident from two slash stories in this issue), we will not accept any slash stories featuring major RoS characters. Our definition of slash is based on Kip Carpenter's wishes as expressed at Son of Herne's Con and Weekend in Sherwood: Neither Robin, Robert, Marion or any of the Merries can willingly be in a homosexual relationship. Guy of Gisburne is definitely 'straight' but the Sheriff can go either way. Any other characters (within reason) are fair game. This leaves a great many possibilities to write about gay characters without spoiling the integrity of those who aren't. 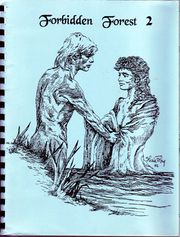 I just got a copy of Jan and Kitty's zine Forbidden Forest, which sheds a little more light on this side (the sexual side) of Robin!! It's a great zine to curl up in bed with...good job, Jan and Kitty! And it was nice to see some of you in print there. [3] 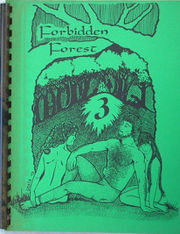 Forbidden Forest 3 was published in 1994 and contains 194 pages. Grace is the front cover artist. It includes a tale about Gisburne's horse.