Orphans of Discipline was a website with mostly Star Wars TPM fanfiction. It was a member of the Discipline Fiction Webring.

Hello, and welcome to the Orphans of Discipline site! Here you will find stories in many different fandoms, all with one thing in common - these are discipline (i.e. spanking) based stories that frequently are not allowed in regular archives. Hence the term "orphans". Stories here may be either "general" or "slash" in content, and they may or may not contain a sexual relationship, and each story will be clearly marked in the information section as to what type of story they are. In addition, the Links page contains links to mailing lists, archives, and author sites that feature discipline stories. Enjoy!

The Star Wars page had a link to the Padawan Punishment Archive and the Master and Apprentice Archive.

The Paddle by CoogieAnn - (Discipline, non-slash) Obi-Wan makes a paddle

Young Obi-Wan (a series) by Diana Williams - (Discipline, Non-slash) This series involves Obi-Wan as a young apprentice to Master Qui-Gon Jinn, predating The Phantom Menace, and loosely following the "Jedi Apprentice" books. Warning: Obi-Wan is 14 at the start of the series but there is absolutely no slash in these stories. The discipline is handled in a caring, parental manner but if underage participants bothers you, please give this one a skip.

Adjustments by Foxtail. (Discipline, Slash) Richie takes on an enemy of Duncan MacLeod's and now must face his lover's wrath.

First you Catch Your Bat... by Diana Williams (Discipline, Slash) Desperate times call for desperate measures, don't they? And then again... WARNING: An Underage (17) character has a sexual relationship with an adult.

A Bird in the Hand by Diana Williams (Discipline, Slash). The morning after, from Bruce's POV. (Same Warnings)

Queer As Folk (US)

One Day It Happened by Jaxom. When Michael refuses to listen to his best friend or his mother about a new guy that's trouble, Brian takes matters into his own hands.

The Last Leap by Diana Williams (Discipline, Slash) Sam Beckett finally leaps home and finds that Al has been waiting for this day - for more reasons than one. 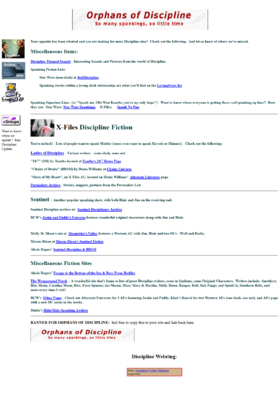 Your appetite has been whetted and you are looking for more Discipline sites? Check out the following. And let us know of others we've missed.

Discipline Themed Sounds - Interesting Sounds and Pictures from the world of Discipline.

Spanking Signature Lines (or "Spank me, Obi-Wan Kenobi, you're my only hope") - Want to know where everyone is getting those cool spanking sig lines? Here they are: Star Wars: Star Wars Spankings X-Files: Spank No One

Ladies of Discipline - Various writers - some slash, some not

Sentinel - Another popular spanking show, with both Blair and Jim on the receiving end.

BCW's Other Pages - Check out Alternate Universes for 3 AUs featuring Justin and Paddy, Klair's Korral for two Western AUs (one slash, one not), and AJ's page with a new OC series in the works.