Onfindan is a Merlin/Arthur slash story by astolat (16,219 words). Onfindan is an Old English word meaning discovery, realization, finding out.[1] [2]

The story won the spring 2009 Merlin/Arthur Fanfic Awards in the categories "Epic" and "Uther Characterisation" and was a runner-up in the category "Action/Adventure".

Summary: Arthur didn't speak to him for a week after he found out.

Onfindan moves from a finding-out fic to monster hunting and then gains a political dimension with epic action/adventure when Camelot is forced to mobilize its army.

There is a bonus map for the setting of the battle scene at the end and Yue KX made a chibi illustration[3] of Merlin and Arthur as secret monster hunters "Based after astolat 's Onfindan, where magic gets antsy, slaughtered foul creatures are collected and bedding Merlin pushes Arthur to start conquering the world on a fake white horse."[4]

The story is frequently the subject of fanfic searches on the merlin_finders story finder community but because there is so much going on the descriptions often make it sound like three or more different stories. ColdBlaze translated Onfindan into Russian for the Arthur/Merlin OTP fest "Две стороны одной медали" (Two sides of the same coin).[5] 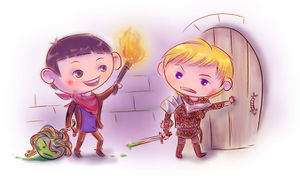 Chibi fanart by Yue KX (2009). Merlin and Arthur as monster slayers, hiding their trophies in the cellar.

First Arthur finds out, then Merlin's magic starts overflowing, and then they start to take on magical creatures across all of Albion. And then Arthur steps up to the plate. An amazing and plotty, epic story with action, adventure, and of course our two heroes.[6]

"Onfindan [...] is an action/adventure/romance Merlin slash story (Merlin/Arthur). And it's simply beautiful. I've read it five times in the last couple of weeks. (It's on my iPod, so I can read it anywhere.) Merlin and Arthur are exactly what I want them to be, and their voices come through very clearly. As many Merlin stories do, Onfindan deals with Arthur discovering Merlin's secret, but that's only the beginning. As the story progresses, we see more and more glimpses of the men that Arthur and Merlin will become (and that Merlin is head over heels in love with his prince)."[7]

"The One That Proves That You Don't Want a Magician for an Interior Decorator. Caterer, Though? Maybe. Maybe. Onfindan, by astolat. Merlin, Arthur Pendragon/Merlin. You may have gathered from the previous story that I have a certain yen for two people taking on the world. This is absolutely true. And if, instead, they choose to take on a series of assorted monsters? That is perfectly fine with me. Merlin is another fandom that is defined by secrets and lies. It was, you know, kind of set up that way, what with Merlin's famous sorcerousness and Uther's nifty way with an executioner. But in this story, wonderfully and marvelously, the Merlin-coming-out-to-Arthur scene takes place before the story starts. We don't get to hear about it! Instead, the secrets and lies belong to Merlin and Arthur both. Because once you have a magical manservant, it's really hard not to use him. (I think we've all been there. Bertie Wooster, especially, totally understands.) And once that magical manservant has inadvertently turbo-charged himself (again, these things happen - I accidentally turbo-charged myself way back in seventh grade), keeping the secret becomes really, really challenging. Fortunately, Arthur Pendragon (who I keep desperately wanting to say, "Arthur, King of the Britons," even though I know that would be wrong) is up to the task. And I think I do mean up. Yes. Magic! Adventure! Sex! Merlin and Arthur, becoming all they can be! This is just like I hope the canon is. (Somebody tell me the canon is just like this. No, really. Lie to me. This is the right set for it.)" [9]