On the Wings of the Knight

On the Wings of the Knight is a 127-page gen Forever Knight anthology edited by Anne Hupe, and possibly Jessica Daigneault. 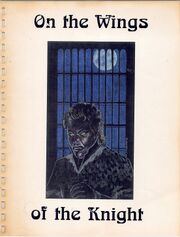 On the Wings of the Knight 1 was published in May 1993 and contains 150 pages. It was a 1994 FanQ winner for Best Forever Knight fanzine. Cover art is by A.R. Urioste; interior art is by Michele West.

This Nick Night/Forever Knight fanzine is actively seeking submissions of short stories, vignettes, poetry, long stories (even novellas, if you have one collecting dust), and artwork, including cartoons.

Already accepted is a Forever Knight/ Shadowchasers long story by Dunn, Smith, and Meachum. Nick's latest assignment brings his work closer to his darker side. Someone is murdering clients of the Raven nightclub by... biting their necks and sucking their blood? Nick is assured by his vampire associates that it isn't them, so it must a a lunatic that thinks he's a vampire? Or is it a vampire who wants people to think that way? suggests Benedek, a nosy reporter who is on the hunt for definitive evidence of the existence of vampires.

Nick finds an enemy far worse than LaCroix has survived extinction by fire and has been resurrected in the present time to wreck vengeance; a murder investigation reminds Nick of the past; a woman is executing people as if they were vampires, and much more. Color cover and interior by Michelle West.

The first issue of this Forever Knight zine is a bit of a mixed bag. The first story, 'Blood Moon Rising' is fun and quirky with Night and Schanke chasing a vampire killer whose kills seem to be leading to the Raven and being helped by Edgar Benedek and Dr MacKenzie of the Georgetown Institute's Department of Paranormal Investigations. These characters are well-developed and add much to the story. "Worthy Few" by Daisy and Lucy Leung is written as an episode - an interesting change - and one which works well. I was able to visualise it on the screen with the characters acting within their parameters. The Spanish Inquisition adds drama and interest. This is well worth a read if you want to find out how Nick ends up stuck inside a stone coffin with a dismembered body. Variety has been added by filksongs and poetry (some of it in French) although none of these created a resonance for me. The main story is "Kyuketsuki" by J. Morrison which brings together present day slayings involving dismemberment and garlic; Nick in 19th century Japan and a vampire slaying sword. There is potential in the story but unfortunately it really needed much tighter editing for this to shine through. [3]

Okay, so I'm a sucker for a good vampire story. Not necessarily a good vampire, but a good story. After suffering for years and years without much of anything, I had a feeling that the sudden outflux of vampire media over the past two years would means that fans would start writing more vampire fiction, especially after Forever Knight appeared.

I suppose I should admit that I purchased this zine through a blind text ad, without having any real idea of what to expect. The package I received was worth the wait aesthetically. Ann Hupe knows more than a little about pleasing layout and her choice of clip-art gives the zine a real feeling of period. The Table of Contents has been turned from an ugly necessity to a tone-setting, artistic statement. The whole zine has a look of easy and elegant class. It's always nice to have a zine that combines ease of reading with delight of design.

A.R. Urioste's cover, done on black, is striking-did the colors really come through the photocopy as well as the original? She manages texture and pattern beautifully, although I'll admit that the most effective part of the picture is the moon against the bars-such lovely shadow work done with color. There isn't a lot of verisimilitude in the portrait, but the glowing eyes are striking and do a good job of mirroring the moon. Her interior illustration of le Chevalier is bright and brilliant. Color is used to good effect, although it does disturb some of the detail lines in the picture. I'm very much impressed by the light and life in the figure's face and the life and spirit evident in the horse.

I've seen Michelle West's artwork in other places and I'm impressed with her increasing talent and her willingness to handle difficult aspects of drawing, such as figure illustration, perspective, and lighting contrast. She's developed a definite style (the white outline around the characters against the black) and is more in control of her lights and darks, but needs to ease the transition between dark and black a bit more. Her figures are still a bit stiff, but she's trying things that I have neither the nerve nor talent to attempt. The illustration on page 28 is her most successful-she manages to convey expression in Alyson's features with the use of very few lines.

There's a nice selection of poetry and filks, which are given credit on their own merits and accompanied by beautifully chosen borders, fonts and clip an. The French epigrams and poems by Martha Prince and Cicatrice du Veritas are delightfully presented and would suffer if translated. I will admit that, not having studied the language, I did have to struggle through a few, but knowledge of the subject and a few words led me to enjoy "Petit Vampire LaCroix," "Mourez-vou, Jean Pierre?," "Application a L'etudiant," and "Chauve-Souris." Cicatrice du Veritas has also contributed three filks. The tune of the first, "Sunrise, Sunset," is ingrained in my soul, and I found that her lyrics didn't always scan properly. The eloquence of "Batday" is limited by the source material-it's a lark and nothing more, vampirism as sung by the mop-top four. I can't say that I recognize the tune to "Moon Fire," but it has some nice lines, including "The myths that keep us safe from you/the lore that keeps you blind."

"The Children of LaCroix, parts I & II" by Lisa Jachymiak has no outstanding lines, due to its prosaic rather than poetic language. Fewer line breaks would have aided in the continuity of theme and thought, particularly in the first part. The second suffers from bad tense shifts in the middle of lines, disrupting the feeling of memory and time passed. I did like the use of the typeface change-highly effective.

Of Vonne Shepard's two poems, "In the Dark" is the more effective. Other than the awkward juxtaposition of living and existing in the last stanza (which she could have made work for her as an ironic twist), the use of the short, rhyme change stanzas is poignant, and interesting, rather than precious. "Walking In Darkness," despite an excellent choice of type and border, is stilted, with incredibly bad meter, and is more representative of a good grade school poetry exercise than an expression of art.

I suppose I am still somewhat surprised at how much presence the Enforcers are given in Forever Knight fan fiction, and that Alyson (a pilot character who got vamped at the very end of the pilot and disappeared) appears in so many stories in the zine. "Blood Moon Rising," by Pat Dunn, Valerie Meachum, and Diana Smith, exemplifies the hold these concepts have taken over the fan fiction. The Shadow Chasers crossover bits are good (although I'll quibble about Jonathan running out of an autopsy, and Benny appears more annoying than usual). The characterizations and dialogue are consistent with the series, down to and including Benny's getting an idea in his head and running with it, even though it's completely wrong, and not telling anyone quite what he's up to.

"Forever," by Barbara Parks, does a beautiful job with Schanke. The plot is interesting and overcomes occasionally awkward sentence structure through sheer force of will.

I'll admit that I'm not fond of script format, because the reader is forced to rely on brief scene settings, direction, and strong dialogue to carry the story through. Unfortunately, "Worthy Few," by Daisy and Lucy Leung, demonstrates the problems inherent in the form when none of those driving necessities are present. The dialogue is often weak, and contains little or no tonal inflection, the scene description is, at best, brief, and the direction was nonexistent. The plot, as well as the Count's body, was filled with holes: there's no way a mummified corpse would have been shipped unknowingly with a museum display, Alyson had little or no motivation for allying herself with the Count, and Nick has performed feats of strength easily comparable to lifting the lid from the stone coffin. The story had some interesting elements that could have come together, with a little work, a change from script format, and some plot holes plugged up, but as it is, it just doesn't work.

"Kyuketsuki," by J. Morrison, is the showpiece of the zine. While a few commas should have been omitted from some of the opening sentences (three commas is a lot, but get some semicolons in there-they have little enough work as it is), the writer's technical skill is well above the fannish average. I found the fannish bits too precious (why make her an ex-Olympic star, the owner of a special sword, a martial artist, and a hot science fiction/fantasy writer? A little goes a long way, for Chrissakes, and I might have sympathized with her more), but not enough to impede the flow of the plot. The historical pieces were evocative, well-drawn, and tactile (I love it when you can just about feel the silk pattern in a kimono).

And while I'm still feeling that soft-soft silk beneath my hand, I'll give On the Wings of the Knight three trees on a definite rising frond. If the quality of the fiaion of the next issue (it is to be assumed there will be a second issue, n 'est-ce pas}) matches or surpasses the story by J. Morrison, this zine is well on its way to hitting a five tree mark. Besides, 1 have to buy the next issue...I'm just dying to see what the next one's layout's gonna look like. [4]

On the Wings of the Knight 2 was published in May 1996 and contains 220 pages. It was edited by Ann Hupe. The front cover is by TACS. The back cover is by Ellen Siders. The single interior illo is by Denise Logan. 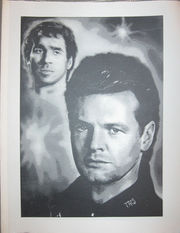 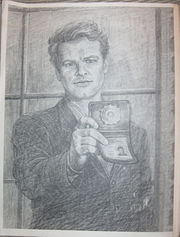 back cover of issue #2, Ellen Siders 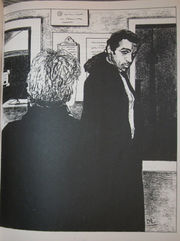 The editor apologizes: "Apologies for the layout problem in "Hostages of Fortune." With repeated computer crashes, I was lucky to preserve the text. The bizarre gaps are the result of trying to salvage what I can and still get this zine out in relative time."