Octavia Blake is a main character in The 100 series.

Octavia Blake is the first person on the Ark to be a second child, since the Ark has a one-child law. She was kept hidden and a secret from the rest of the crew except for her mother and brother. Octavia was eventually exposed during a dance, and was locked away - losing her mother and was kept from seeing her brother.

Octavia is then sent down to Earth with the other 100 delinquents. When the spaceship lands she is reunited with her brother, Bellamy, and becomes the first sky person that walks on the Earth. She later finds and befriends a grounder, Lincoln, with whom she later develops romantic ties to and who is eventually killed.

In Season 2, she joins the grounders and trains with them to become a warrior.

She also had two other canon romantic interests (although minor in comparison to Lincoln), Atom and Illian, that also died.

In Season 5, it's revealed she is now called Blodreina aka the Red Queen and is the leader of Wonkru, which is what is left of the twelve clans in the Second Dawn Bunker.

Octavia Blake is a popular character within The 100 fandom, often appearing in fanworks and discussions on various websites (namely AO3 and Tumblr). In fanfiction where it is not focused on her, she often appears as a secondary character and paired with one of her ships.

However, like other characters in the series, not all of her actions are favored by the fans. In season 5, this is present with her actions as Blodreina/Red Queen where she keeps the clans under control by having people that committed a crime fight to the death - some fans did not like the actions she has taken[1][2], others understood and supported her[3][4][5]. 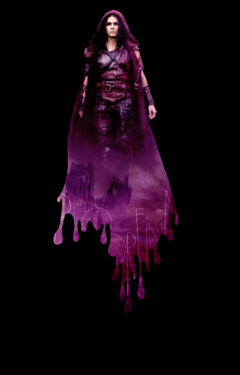 Octavia in her role as Blodreina. Fan edit by brittania_, that was retweeted by the showrunner[7]