There were at least two, the second published in May 1990.

Here we are at the second of my generic letters, designed to, hopefully, answer all your questions and keep you up-to-date on the happenings around here. If none of this interests you then for Pete's sake don't torture yourself by reading it! 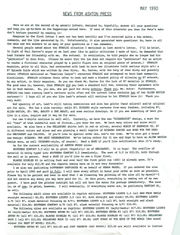 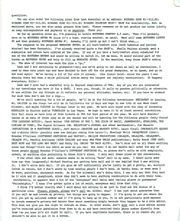 second page of May 1990's "News from Ashton Press"

Response to the first letter I sent out has been terrific and I've received quite a few orders, contents, and the like generated by it. Unfortunately, it also generated more questions! So, here is all the news and the answers to as many of your questions as I can remember.

Several people asked about the STARLOG situation I mentioned in last month's letter. I'll be brief. In light of Paul Darrow's anger at me last year (due to public criticisms I trade of him), he demanded that Leah forsake her friendship with me. She refused. In retaliation, he told people she no longer had his "permission" to draw Avon. (Please be aware that the law does not require his "permission" for an artist to render a fictional character played by a public figure into an original piece of artwork.) STARLOG magazine, prior to all this, had contracted with Leah to have her illustrate (with serious style art) a B7 Episode Guide which was written by Jean Airey. Mr. Darrow, with the help of Jean Airey and possibly others (STARLOG mentioned an "American lawyer") contacted STARLOG and attempted to have Leah summarily blacklisted. STARLOG withdrew their offer to Leah and made a blanket policy of allowing no B7 artwork, by any artist, in their magazine. So you can thank Mr. Darrow for the lack of B7 material in STARLOG. The good news is, however, that STARLOG did pay Leah a standard kill fee, honoring their agreement with her in that manner. So, you see, she got paid for doing nothing. Thank you, Mr. Actor!

Furthermore, STARLOG has been running Leah's cartoons quite often and the current issue contains two of her ALIEN NATION cartoons!!! I hope all of you who like Leah's artwork will continue to let STARLOG know it! Thank you very much!

[much snipped about zines and things for sale, cat shows, traveling...]

A few other odds and ends: someone seems to be writing "hate" mail in my name. I heard quite some time ago that (supposedly) Michael Keating was getting hate mail and it was implied that I was writing it. I don't write hate mail. If you piss me off sufficiently you're likely to get a pretty, er, succinct letter in return, but I don't waste my time sending people I don't know, or hardly know, or even ones I do know, pointless, anonymous words. As for the slimeball who's doing this, I can only say that they must be 1) sick and 2) unemployed, since they don't seem to have anything constructive to do with their time. Incidentally, it appears that a lot of the "anonymous" mail being sent various places is postmarked "Philadelphia." I know I've gotten quite a lot of weird, anonymous mail from that city.

I think I'd better clarify what I said about not writing to me just to find out the status of a particular zine. Please, please, please don't call me, either, okay? I can just about guarantee that if you call me and invade my privacy, two things are going to happen. 1) I'm going to ask you where the hell you got my unlisted number and 2) I'm going to hang up on you. It is not particularly good manners to invade someone's privacy and harass them about something simply because they happen to be a zine editor. This does not give you the right to intrude on them. In other words, don't ever call a zine editor unless you've received prior permission from them to do so and have received their phone number directly from them (so you know it's all right to call). If you have legitimate business, there is no reason why you shouldn't be able to put it in a letter.