Mort's Lair was Morticia's website for her Star Trek: Voyager and X-Files slash fanfiction, including a Xenaverse and Highlander story and original slash. The byline of the site was "A place where no m/m slash fantasy is forbidden..........." and it had the obligatory "If you're over eighteen and understand the nature of the site you're visiting, step inside and linger for a while in this safe haven for dark desires" disclaimer and the typical warnings:

ALL THE FICTION IN THIS SITE IS M/M SLASH!! THAT MEANS TWO MEN HAVING A SEXUAL RELATIONSHIP. IF YOU ARE BELOW THE AGE OF CONSENT, LIVE IN A PLACE WHERE SUCH READING MATERIAL IS ILLEGAL OR HAVE A PROBLEM WITH THE IDEA (for some OTHER strange reason) GO AWAY NOW!!! BY FOLLOWING ANY OF THE LINKS BELOW, YOU ARE CONFIRMING THAT YOU ARE A LEGAL ADULT AND FULLY UNDERSTAND THE NATURE OF THIS SITE." 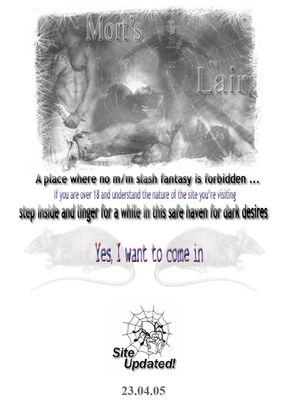 All stories are Chakotay/Paris unless stated otherwise. The summaries are from Mort's Lair.

Story length information refers to file size and not to word count.