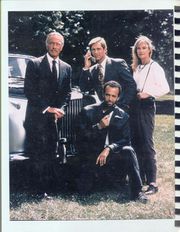 Moonbane is a 96-page gen crossover novel by Tracy Fretwell and Gillian Holt. All, or part, of this story appeared in Green Floating Weirdness 9 and Addington International Restricted Files. The fandoms crossed are War of the Worlds, Manimal and Counterstrike. It includes fantasy elements. Interior black and white drawing art work by Fliss Davies, Anja Gruber, and Priscilla Tweed.

Summary: This is also a crossover with Counterstrike and Manimal and has fantasy elements. The aliens are trying to create a doomsday weapon. Stone is nearly taken over and finds out some startling facts about his past; and Ironhorse and Norton get a surprise.