Midnight Fantasies was a Lovecraftian horror zine by Wilum Pugmire, one of his earliest zines. It published articles and essays, poetry, short stories, interviews and reviews. The first two issues were free of charge.

Besides Lovecraft-related topics, Pugmire included in the zine some photos of Barbra Streisand, his favorite actress at that time, and some other Streisand content such as reviews of her movies. This decision was met with negative reactions from some of the readers (see letters of comment for the Midnight Supplement).

It was a very chaotic publication, and there wasn't much content. <...> My friend asked if there was issue number four, and I have no memory if there was. The last issue I remember going with number three, and this actually had some substance! [1]

Midnight Fantasies #0 was a zine-length advertisement for the new zine. It included the cover for the issue #1, editorial by Wilum Pugmire, some photos of the editor, ads for the zines from the Silver Scarab Press and the movies Hush... Hush, Sweet Charlotte and The Mummy's Shroud, a comic and some horror art. 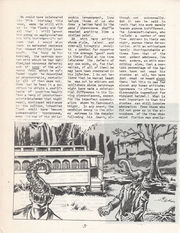 Illustration for the famous Lovecraft's dream that inspired "The Thing in the Moonlight" by J. Chapman Miske, art by Dave Billman 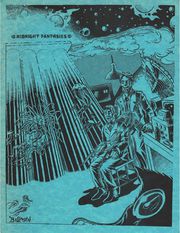 Illustration for Lovecraft's "From Beyond" by Dave Billman on the cover

Midnight Fantasies #2 was published in September 1974. 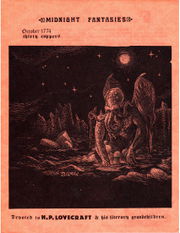 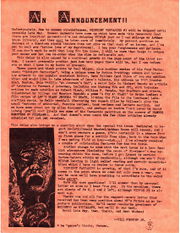 The second page of the issue

Midnight Fantasies: An Announcement was published in October 1974 (the date was written as 1774). In the two-page announcement, the editor explained that the issue #3 would be delayed, described the content of the next issues and promised not to publish photos of Streisand in the zine anymore ("before I get lynced by certain Barbra-haters within my readership"). 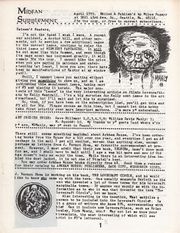 Midfan Supplement was published in April 1975 (the written date was April 1775). The editor cited financial difficulties as the reason for delaying the issue #3, but explained that

I cannot leave you waiting without giving you something to chew on, and so I am publishing this supplement issue, taking part of #3 and placing it herein"

Most of the letters published in the Supplement criticized Pugmire's decision to write praises of Barbra Streisand in the previous issues of the zine and publish her photos. The readers voiced their dislike of the actress and argued that she had no place in a Lovecraftian zine.

[Dirk W. Mosig, Ph.D., Esq.] I fear that quite a few of your readers would like Barbra OUT of MIDFAN (or any other Lovecraftian endeavor), including some notables (like Bob Bloch & Vernon Shea) besides myself, but were to polite to harass you about it.. (one of these even remarked that Barbra was easily the most horrifying thing in MIDFAN). ((They better watch it, too. --Wilum)) So for Pete's sake reconsider whether your two devotions are truly compatible (only one true faith etc., you know...).

Yours by That which Gibbers in the Abyss,

[Robert A. W. Lowndes, Esq.] It's sad that number one did not reproduce so well, but it's readable; and I see with pleasure that you've caught and overcome whatever it was that was responsible for the difficulty the first time. Back in the days when fanzines first started most early issues were far less presentable than yours. One difficulty was that many of us never suspected that, to cut a mimeo stencil on a typewriter, you needed (a) to disengage the ribbon completely (b) clean the keys (c) use a backing sheet on top of the stencil -- otherwise, certain sharp keys -- particularly "o"s would make a hole. ((The problem with #1 was too light a type. But now my electric typer has broken down, and I'm reverting to this manual monster--so this issue will probably suffer from light type, too. I'm pounding the keys as hard as I can. --Wilum))

[J. Vernon Shea, Esq.] In your first issue I liked Robert W. Lowndes's article on HPL, which had some shrew observations (Lowndes used two of my stories in his regrettably defunct MAGAZINE OF HORROR.) Williams's piece on Donald Wandrei astounded me, as it must be a fanzine "first."

Your devotion to Streisand is touching, but is wildly out of place in a Lovecraftian magazine. HPL saw very few films, and I feel quite certain that he would have thought Streisand obnoxious. I was amused you saw FOR PETE'S SAKE no less than seven times, for that was a film which Robert Bloch, Dirk Mosig and I very carefully avoided, as none of us can stand Streisand. ((I've now seen it nine times. It's her second worse film, true, but she is always worth rescreening. Such a face... --Wilum))

[Richard Smoot, Esq.] I've yet to do little more than glance thru it and ? your use of Barbra Streisand's photos all over. Do you honestly think she's what Lovecraft had in mind--? ((What, he married a beautiful Jewess, didn't he? And, really, young man, I don't think confining photos of Her Highness to one page per issue is "all over", eh? --Wilum)) 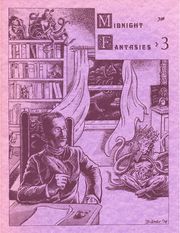 Portrait of Lovecraft by Dave Billman on the cover 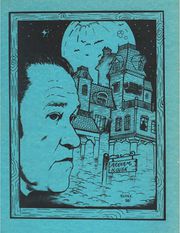 Portrait of August Derleth by Allen Koszowski on the back cover

These are marvelous – many thanks to Will for making them available and to Mike for archiving them on the site. Especially now, these are treasures to behold of Wilum’s creativity and love of sharing things of a Lovecraftian vein. Remembering you always, WHP. – rdl. [2]