Black Oracle is a science fiction and horror zine.

It was published semi-annually from 1969 till 1978. Ten issues were produced.

At least one issue has Star Trek: TOS content, but it is unlikely other issues did.

The staff artist is Ken Lodge.

Whut is a Black Oracle? Well, let me try to explain it. It's this small fanzine, see, an' the type size is so small that old people like myself gort to put on specs to read whut's inside. Between it's covers there are lots of weird articles and an' poetry and stuff like that. It's very popular with sarten secret societies called "fandom", a cult of some kind. I just got the latest copy, nubmer 8, an'... Gad, whut's that smell? Somethin' arisin' from the cover! Is that why it's initials are... Argh! It's that Thing... That Daemon---- G'Orgh Shto-Vrr!!! Arrggg... [3] 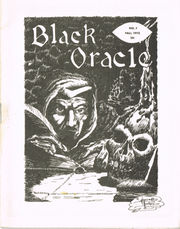 The telegram exchange, the former co-editor's response: "TOO BUSY FOR PHONE CALLS TOO BUSY FOR FANZINE GOOD LUCK
BILL GEORGE"

The zine has a new co-editor, as the last one has resigned abruptly; the editor includes a copy their telegram exchange.

And finally, it is with much regret that I announce the passing of Terry, my pet tarantula, on August 12th. Terry (also known as Cousin Irving) had been a household pet for 10 years and in July of 1972 was described and pictured in a newspaper article appearing in Baltimore's The Evening Sun (See Black Oracle No. 6 for reprint). He will be greatly missed.